It appears that money continues to disappear at the Vatican Bank.  Perhaps it is time to call Cardinal Fang out of retirement to re-establish it's "credibility" in the financial world...after all..."NOBODY SUSPECTS" that the Vatican is actually laundering money for the Mafia, holding money illegally gained from Germanic Jews by Nazi Germany, or simply using the funds to keep pedophile priests under wraps. 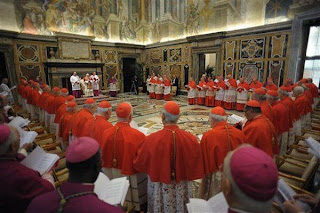 Nobody suspects because nobody actually knows...including the Pope, as made evident by an article in the Wall Street Journal from 2009:
As part of Pope Benedict XVI’s campaign for transparency, the secretive Vatican bank gets an overhaul with Italian economist Ettori Tedeschi being appointed the new chief executive, replacing a predecessor that was in position for 20 years. The bank’s supervisory board has also been revamped. The venerable head of the Catholic Church has ‘shaken up management at little-regulated Vatican bank.’ One Vatican official says, “We expect deep change.”


Only a ‘small group of cardinals and, ultimately, the pontiff, regulate the bank.’ There have been various ‘abusive practices stemming from a lack of oversight’ that have emerged over the years. In the late 1980s, the bank got embroiled in a massive banking scandal where ‘the Vatican paid $250 million for contributing to the collapse of another bank.’
Though no reasons were given by the Vatican regarding the major overhaul of its bank, it is said that the Holy See has ‘long sought to shake up the bank’s management in a bid to modernize its operations.’
The objective now is transparency but that is ‘likely to run up against the Vatican’s long tradition of maintaining a low profile when it comes to managing Church finances.’ It is the lack of transparency and oversight that has led to the abusive practices over the decades.
Not to mention this article from Associated Press just 5 days ago!!!!  (See how efficient Rome really is!  LOL)
Click This Link to Read: Vatican Bank mired in laundering scandal
So, murder, intrigue, laundering money, sexual scandals...sounds like the Catholic Church is doing a great job putting the "Father" back into "God"!

"Fredo, you're my older brother, and I love you. But don't ever take sides with anyone against the Family again. Ever."
Sir Hook "the Practicing Catholic (tho sometimes I question why) Who Wants His Share from the Vatican Bank" of Warrick  (I'll make you a deal you can't refuse!)