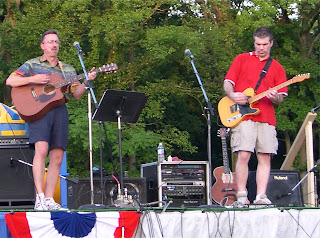 Sir Hook and company have been known to Rock N Roll, so I thought I would share the Top 10 Guitar Songs from Rolling Stone's new issue, which features the Top 100 Guitar Songs. Of course, with any poll, it's subject to interpretation; however, in my humble guitar playing opinion they have done alright, especially in leaving me out of the top 100! 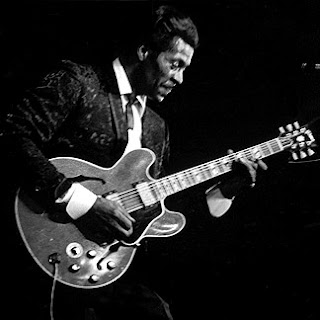 "If you want to play rock & roll," Joe Perry told Rolling Stone in 2004, "you have to start here." Recorded 50 years ago, on January 6th, 1958, at the Chess Records studio in Chicago, Berry's "Johnny B. Goode" was the first great record about the joys and rewards of playing rock & roll guitar. It also has the single greatest rock & roll intro: a thrilling blast of high twang driven by Berry's spearing notes, followed by a rhythm part that translates a boogie-woogie piano riff for the guitar. "He could play the guitar just like a-ringing a bell," Berry sings in the first verse — a perfect description of his sound and the reverberations still running through every style of rock guitar, from the Beatles and the Stones on down. "It was beautiful, effortless, and his timing was perfection," Keith Richards has said of Berry's playing. "He is rhythm man supreme." Berry wrote often about rock & roll and why it's good for you — "Roll Over Beethoven" in 1956, "Rock and Roll Music" in '57 — but never better than in "Johnny B. Goode," a true story about how playing music on a guitar can change your life forever. 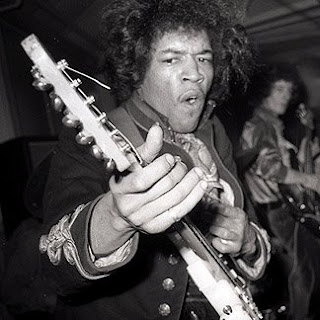 The riff is pure blues — the same kind of guitar figure Hendrix played nightly back on the R&B-club grind, as a sideman for Little Richard and the Isley Brothers. But in "Purple Haze," Hendrix's second British single and the first track on the U.S. version of his debut album, he declared himself a free man — "'Scuse me while I kiss the sky" — and unveiled a new guitar language charged with spiritual hunger and the poetry possible in electricity and studio technology. "Guitar — you can play it or transcend it," said Neil Young when he inducted Hendrix into the Rock & Roll Hall of Fame in 1992. "Jimi showed me that. I heard it, felt it and wanted to do it." Hendrix wrote "Purple Haze" backstage at a London nightclub in December 1966 and recorded basic tracks with his band, the Experience, two weeks later. But the galactic travel came in overdubs recorded on February 3rd, 1967: Hendrix's solos, swimming in echo and sparkling with harmonics, were put through an octave-boosting effect and played back at twice the speed. In less than three minutes, Hendrix opened a new age of expression on his instrument. 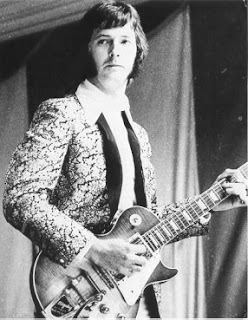 Eric Clapton once described Cream's music as "blues ancient and modern." This track is what he meant. He was not yet 23 when he played this high-velocity version of the Robert Johnson song at San Francisco's Winterland on March 10th, 1968. Everything in Clapton's solos is grounded in the blues vocabulary but pointed to the future. "When Clapton soloed, he wrote wonderful symphonies from classic blues licks in that fantastic tone," Little Steven Van Zandt told Rolling Stone in 2004. "You could sing his solos like songs in themselves." 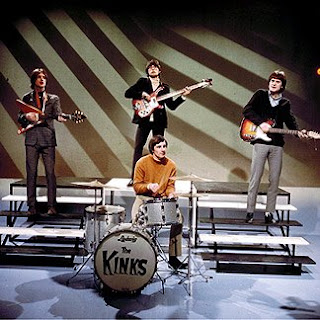 It was, at first, "a jazz-type tune," said Kinks singer Ray Davies, and the two-chord figure driving it was a sax line. "That's what I liked at the time." Then his brother Dave played it on guitar through an amp speaker he had poked with needles and shredded with a razor blade. ("It was a Gillette single-sided blade," said Dave.) Dave's solo — a tangle of zigzags and viciously bent notes — heralded the birth of Sixties garage and punk-rock guitar in one fell swoop. "I said I'd never write another song like it," said Ray. "And I haven't." 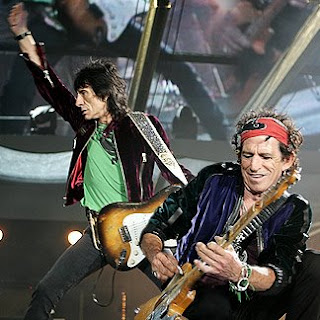 "Satisfaction" may be the Rolling Stones' most recognizable riff, but this Sticky Fingers hit — based on a gutbucket guitar part devised by Mick Jagger — is the band's raunchy guitar pinnacle. Keith Richards' secret weapon: He's playing a guitar that's missing its lowest string. 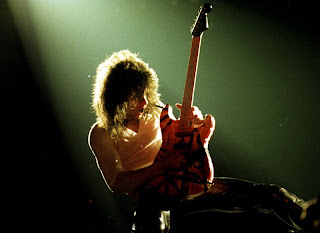 Eddie Van Halen's 102-second mission statement was a piece he invented onstage: a solo showcase for his mastery of tone and technique, notably the rush of notes he produced with his fretboard tapping. An army of teens would try to duplicate it, emerging years later in every metal band of the Eighties. 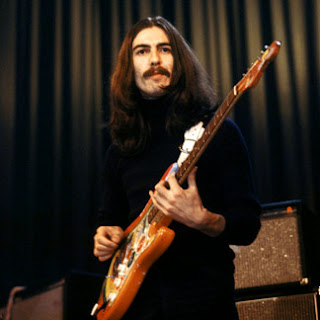 This is a tale of two guitar giants at an empathic peak: George Harrison, who wrote this song on acoustic guitar in India, and Eric Clapton, who amplifies Harrison's vocal dismay with a waterfall of blues fills. It's the finest examaple of his jagged, late-Sixties tone. 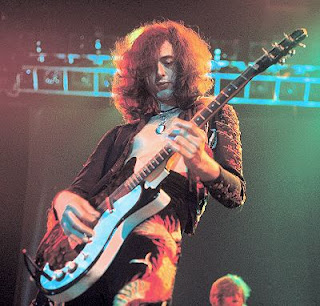 "Stairway," Jimmy Page told RS in 1975, "crystallized the essence of the band." It's a masterpiece of dramatic ascension: Page's acoustic picking rising into chiming chords, which introduce the solo, a brilliant succession of phrases that steadily move toward rock & roll ecstasy. In 1968, Gregg Allman went to visit his older brother, Duane, on his 22nd birthday. Duane was sick in bed, so Gregg brought along a bottle of Coricidin pills for his fever and the debut album by guitarist Taj Mahal as a gift. "About two hours after I left, my phone rang," Gregg remembers. " 'Baby brother, baby brother, get over here now!' " When Gregg got there, Duane had poured the pills out of the bottle, washed off the label and was using it as a slide to play "Statesboro Blues," the old Blind Willie McTell song that Taj Mahal covered. Duane had never played slide before, says Gregg, but "he just picked it up and started burnin'. He was a natural."

The song quickly became a part of the Allman Brothers Band's repertoire, and Duane's slide guitar became crucial to their sound. "Statesboro Blues" was the opening track on their legendary 1971 live double album, At Fillmore East, and ever since, the moaning and squealing opening licks have given fans chills at live shows. "It wasn't something that Duane would play the same way every night," says current Allman's guitarist Warren Haynes, one of many guitarists who have filled Duane's shoes since he died in late 1971. "But in all of our heads, that's the way it goes." 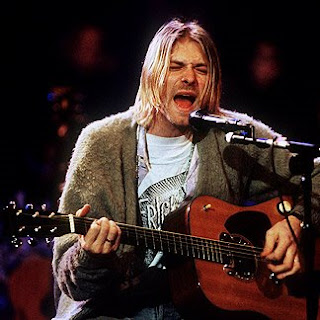 Most of "Teen Spirit" came easy — Nirvana nailed it in three takes — but that crucial Kurt Cobain guitar intro required an overdub ("That pissed him off," said producer Butch Vig). It was worth the effort: That riff, along with the band's loud-quiet-loud dynamics, defined Nineties rock.

So there you have it, for better or worse, the Top 10 Guitar Songs. Personally I would have included the next three in the Top Ten. There are: #11 "Whole Lotta Love", Led Zeppelin...#12 "Voodoo Child (Slight Return)", Jimi Hendrix...#13 "Layla", Derick and the Dominos (really Eric Clapton). I believe that Chuck Berry's "Johnny B Goode", though a pioneer in rock n roll, is listed as number one because it's a pioneer, not because it's such a great guitar song. Kind of like a "Lifetime Acheivement Award". From these Top 13 songs, my Top 10 would be:
1. "Voodoo Child (Slight Return)", Jimi Hendrix
2. "Purple Haze", Jimi Hendrix
3. "Layla", Derick and the Dominos
4. "While My Guitar Gently Weeps", George Harrison and the Beatles
5. "You Really Got Me", the Kinks
6. "Whole Lotta Love", Led Zeppelin
7. "Stairway to Heaven", Led Zeppelin
8. "Brown Sugar", Rolling Stones
9. "Eruption", Van Halen
10. "Crossroads", Cream

Now, I invite you to comment on your Top 10.

Rock On!
Sir Hook the Rock Guitar Hero of Warrick