On the Road: Nashville Weekend 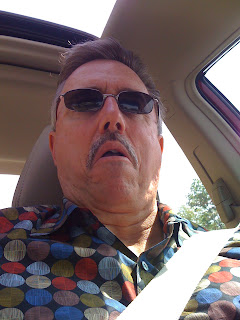 Sir Hook begins his journey on the road to Nashville by taking a picture of himself while driving 80mph on the Pennyryle Parkway. Obviously, Sir Hook hasn't learned a damn thing about driving after breaking his back last July! 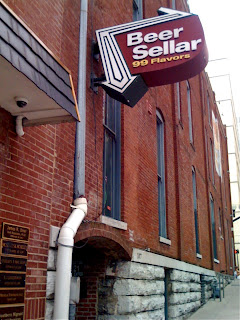 First stop in Nashville is the "Beer Cellar", located in the basement of an old warehouse along the Cumberland River on Church Street between 1st and 2nd Avenue. Famous for 99 barrels of beer on draft, not 99 bottles of beer on the wall. A great place for a Knight and his Lady to warm up for the evening ahead! 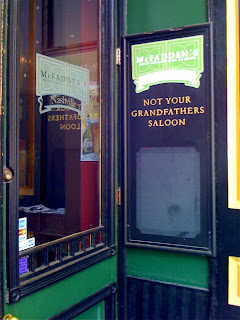 Wondering down 2nd Avenue, the heartbeat of the "District", Sir Hook and Lady Allwinky decided we just had to have another Pint at McFadden's. The sign said it all, not your Grandfather's Saloon! Good thing, because neither one of my Grandfather's drank beer; however, my Lady's ancestors perfected the art in Ireland and New York! Ah, Unity through Diversity! 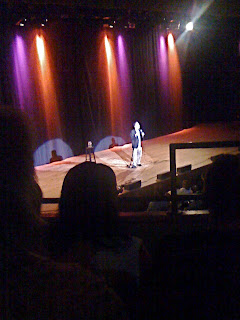 We finally arrive to our destination for the evening, the Ryman Auditorium. Originally built as the first non-denominational Christian Church in the country, it became the original home of the Grand Ole Opry, Johnny Cash's TV show in the 60's, and now a concert venue. It's quite inspiring to sit in wooden pews while drinking beer and either jamming or laughing your ass off! Now, that's what I call going to Church! We went to see John Stewart, from the Daily Show. Very funny and insightful. The highlight of the evening was his joke about catching a guy on the security camera outside his studio in New York having sex with a Pinata! He said, "Maybe that's how they get the candy in those things?!" I couldn't resist shouting out, "He's stuffing it with Marshmallows!" The whole place busted up, and John kept referring to Marshmallows the rest of the night. I'll be watching the Daily Show next week to see if Marshmallows makes it into the show. I'll send him my invoice for royalties! 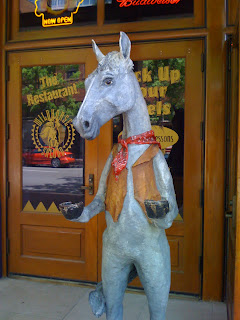 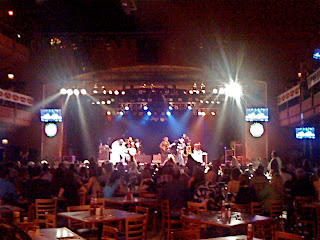 Tonight, we were pleasantly surprised to see the Outlaws. One of my favorite Southern Rock bands from the 70's. We were bathed in the vocal and guitar harmonies of "Green Grass and High Tides Forever"! They're in town working on a new CD for release later in the year. 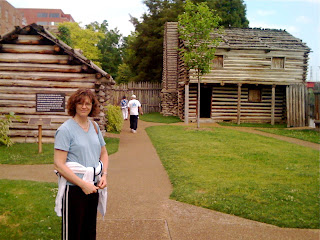 We woke up late the next morning and enjoyed walking around downtown Nashville before heading home. Here's Lady Allwinky inside the reconstruction of the original Fort Nashborough , as Nashville was originally called. It was named after General Nash from North Carolina, who was killed in battle by the British during the Revolutionary War. (Good shot Sir Dayvd!) Anyway, it's located right on the banks of the Cumberland River right behind the Wildhorse Saloon. 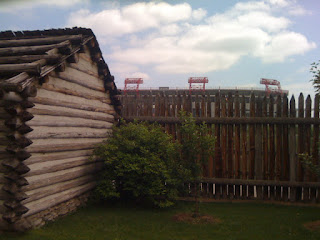 What struck us as most interesting was the contrast between Old and New. As viewed in this picture over the stockade as the original settlers would look out for us crazy Cherokee's , you now see the brand new LP Stadium across the River, home of the Nashville Titan's National Football League Team. Progress? 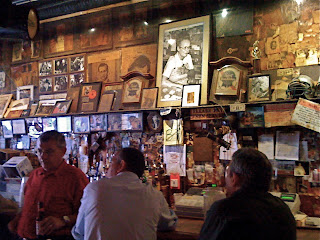 Before we left town, we decided to hit the most famous of the Country Music Dive Bars in the land, Tootsie's Orchid Lounge! The walls are covered in old promotional pictures, albums, etc from the Country Music greats. Tootsie used to keep a cigar box behind the bar to keep IOU's from struggling artists so that they could eat, drink and perform. It was a tradition that at Christmas time the famous Country Singers would come in to pay off the IOU's so that the artists could continue to try to make it and Tootsie wouldn't be out the money. That's Southern hospitality! 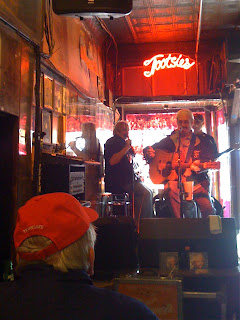 We enjoyed hearing some classics performed by the house band that afternoon. 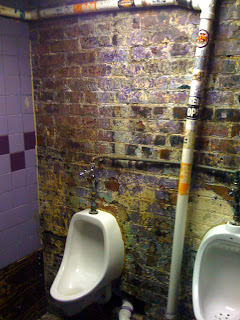 And no trip to Tootsie's, or Nashville for that matter, is complete without taking a piss for the road in their bathroom. Something to be said about sharing a urinal with Willie Nelson, Waylon Jennings and the boys who all got their start in this historic place.