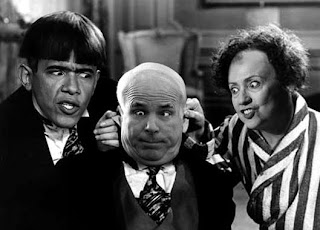 Who says TV isn't as good as in the classic days? All you have to do is tune into the news and get your fill of Scary, Smo and Girly!

Today is Primary Day in Indiana. Of course it's really more of a race in the Democratic Party. I'm a registered Republican who today would vote for Obama if allowed; however, I can't cross Party lines today.

The scary part about how we choose a President in this country is how the parties use television advertising to move the masses. Being in the business, it's always intriguing to see how people respond to television, like lemmings marching to the sea. It's all fine in promoting a sale, choosing a health care system, but when it applies to who decides the future of our country it turns into a very dangerous game. I believe that most Americans today are just too damn lazy to truly inform themselves about were candidates stand, so they rely on the media to tell them what they believe. This is how we ended up with a crazy cowboy from Texas who has single handily ruined our reputation, bankrupt our country and has plunged the entire world into anarchy. Yeah, that's right, I voted for the son of a bitch! So, this year, even though I have enjoyed the Scary, Smo and Girly show, and have admired my peers in massaging their messages, I will do my own investigation to be as informed as we all should be before we pull that lever, punch that ticket or touch that computer screen. After all, that touch leads to the person who will touch everything that touches our lives.