You can thank Dale Earnhardt (in real life) and Ricky Bobby (in the movies) for providing us with the now famous pop culture phrase, “Second place is just the first place loser.” 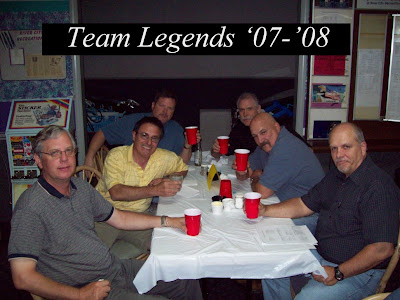 From left: Sir Norman of William Nottingham Court, Sir William of Keglers, Sir Cock of the Walk, Sir Bowie of Greenbriar, Sir Seamus of Marion, and Sir Allen of Wall.

Would I have preferred to win? Sure! But, Second place in a big league is nothing to be ashamed of. Or is it?

The lesson that many parents and coaches are teaching our youth is “unless you win, you’re a loser!” Is that true? We should be teaching our kids (and ourselves) that failure is not just acceptable, it’s often essential. One of the greatest home run hitters in Major League Baseball is “Mr. October,” Reggie Jackson. He also is the all-time strikeout leader! Who tops the NFL in pass completion? Bret Favre. He also is the all-time thrower of interceptions! Who is the all-time leader in kicking that silly looking black and white round ball into that big net in soccer? (Okay, I don't know anything about soccer). But, the point is that Jackson and Favre are glorious failures!

Failure! How else are we going to gain the experience we need to improve if we don’t “fail” from time to time?

As I look into my box of memories, I see a few First Place Blue Ribbons and A LOT of Second Place Red Ribbons: wrestling, track and field, speech contests… Don’t get me wrong, I hate “not winning.” But, I don’t let it define me AS a loser – unless I come into the event unprepared and don’t give it my best.

Dale Earnhardt may have given us that “second place is the first place loser” crap, but he also said, “You win some, you lose some, you crash some.” I believe that in his heart he would rather have competed and lost, than not to have competed at all. He competed till the end -- that last crash.

Team Legends will be back next year to proudly defend our “First Place Loser” title. Who knows, maybe we’ll just move up a notch. If not, at least we’ll enjoy a cold beer with friends and fellow Knights.