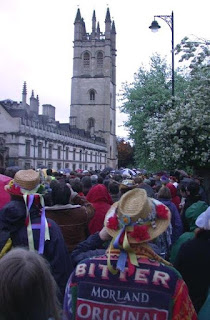 At 5am in the new dawn of May, Oxford's streets are filled with thousands of revellers, all heading for the tower of Magdalen College, at the end of High St, perched on the banks of the River Cherwell. A great many of the young people have been up throughout the night in anticipation, wassailing in the ancient taverns of the city, catching a few Zzzzz's in the stalls of the all-night picture shows, and partying till first light.

Some have managed to evade the Police cordon on Magdalen Bridge, to jump from the parapets into the shallow river, a time honoured student tradition that has been made even more time honoured by being banned, because from thirty feet up, two foot of water usually means broken ankles. The cameras roll for the lunchtime news.


All over the city the Morris dancers and fire jugglers and pagan followers are out in force, and we mingle with flower hatted people, some of the men wearing coats made out of purloined Bar Towels, which advertise the local beers.

At 6am, the faint drizzle ends and the rising sun starts to faintly warm. A hush descends over the vast crowd, as ears strain to pick up the sound of Magdalen School Choir, high up on the 15th Century tower, madrigals and hymns sung over the centuries, once again fluttering down on a playful Oxfordshire breeze, welcoming in the new Summer.

The singing ends, a rolling cheer goes up, and the throng breaks ranks and fiddle music and accordions felicitate the terpsichorean muse... as everyone streams back to the taverns for a hearty Full English Breakfast, and a beer. 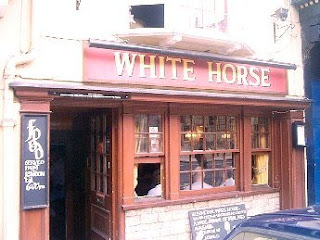 In the tiny oak panelled bar of the White Horse, in the Broad, we jostle under flying foam and elbows at the bar, voices raised to be heard above the noise.

A tousled academic in need of sleep. scrimmaging alongside me for the bar staff's
attention says, " Carl Jung once said that 'The Latin word for alcohol is ' Spiritus', whether in a drink or prayer or meditation, its the warmth of the spirit we seek " " Quite so..........". I say, as I dive for the chink of an opening at the bar , that he leaves in turning to speak to me. For a moment I forgo my ongoing life long quest for authentic spiritual experience, and the warm feeling of contentment that everyone wants, and yell out my order, " three bitters and two full English". I turn to the still gesturing academic. " .......... you've got to feed the soul. "