Sir Hook knows that I'm always coming up with useless inventions. I have the idea, I write about it and sketch it in my Moleskine, and then I say, "Piss on it!" The joy comes in creating the idea, not bringing it to market.

Well, here's a story of a couple of guys who had the balls to take their idea and literally piss on it all the way to the bank: 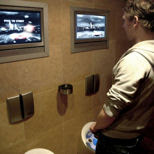 Werner Dupont, a software developer, and Bart Geraets, an electrical engineer, got the idea while drinking Belgian trappist beers, they told Reuters Television at a local festival on Sunday.

“This thing had to be invented by Belgian people and that’s what we are,” they said.

The ‘Place to pee’ booth is designed for two users at a time and offers two games - blowing up aliens in outer space or skiing down a virtual slope. Gamers hit their target by aiming at sensors positioned on either side of the urinal.

So, there you have it. The next time you have an idea and think to yourself that it's too piss poor an idea to succeed, think of ol' Werner and Bart.