Different countries celebrate Mother’s Day on various days of the year; today is Mother’s Day here in the United States.

Mother’s Day may have spiritual roots. It is believed to have originated from the 16th Century Christian practice of visiting one’s mother church annually, which meant that most mothers would be reunited with their children on this day.

In the U.S. we can thank Julia Ward Howe and Ann Jarvis for this day (around the American Civil War). In 1914 President Wilson declared the first national Mother’s Day as a day for American citizens to show the flag in honor of those mothers whose sons had died in war.

Of course today, it’s one of the most commercially successful U.S. occasions (gifts of cards and flowers) as well as the most popular day of the year to dine out at a restaurant. Nothing says "Happy Mother's Day" like long lines, mediocre food, a bevy of screaming kids, and handing over a paycheck for the experience!

What many people don't know is that Mother's day is also a perfect day to celebrate with a great beer. If you’re lucky enough to be in Astoria, Oregon, you can stop by the Fort George Brewery and Public House for their Mother’s Day Beer.

The Fort George Brewery + Public House releases its new Bourbon Barrel-Aged Doppelbock this Mother's Day, May 11th --- which coincides with the start of the Astoria Sunday Market, so moms who are out and about downtown are encouraged to stop by and try the Fort George's latest creation.

Doppelbock is a strong German-style lager, traditionally brewed in the winter to be consumed in the springtime. The monks of St. Francis of Paula originally brewed this style of beer, calling it Salvator, which means savior. Other German brewers began making the beer, of which there are now about 120, all with the suffix, -ator.

Now, after months of fermenting and aging their brew in Jim Beam bourbon barrels, Fort George brewers are calling their Doppelbock Illuminator, which reflects the experience of drinking the beer. 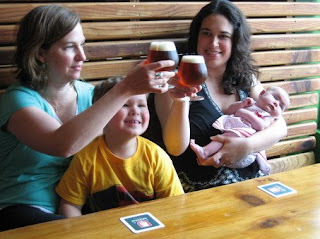 "Warm and inviting, the beautiful, dark brown color sparkles as it catches the light. Illuminator tastes rich and malty, with an intriguing hint of bourbon, and a nice dry slightly hoppy finish to balance it out," said Chris Nemlowill, of the Fort George Brewery + Public House. (end)