Okay, I admit it. When I was younger (so much younger than today), I used to drink Pabst Blue Ribbon. Its reputation has been, as long as I can remember, “red neck” and “cheap!” But, still, that was my beer of choice. My tastes have evolved over the past 30 years or so, but you can still usually find couple of cold PBRs in my garage refrigerator.

But, I’m never dying to have one. Not like the following guy I read about recently:

by The Associated Press 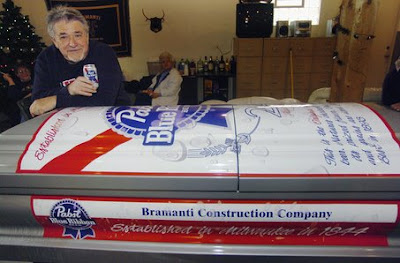 "I actually fit, because I got in here," said Bramanti of South Chicago Heights.

The 67-year-old Glenwood village administrator doesn't plan on needing it any time soon, though.

He threw a party Saturday for friends and filled his silver coffin -- designed in Pabst's colors of red, white and blue -- with ice and his favorite brew.

"Why put such a great novelty piece up on a shelf in storage when you could use it only the way Bill Bramanti would use it?" said Bramanti's daughter, Cathy Bramanti, 42.

Bramanti ordered the casket from Panozzo Bros. Funeral Home in , and Scott Sign Co. of Chicago Heights designed the beer can.

Gives you something to Think, Drink, and Be Merry about.