I Pulled A Rabbit Out Of A Saviors Crown Of Thorns 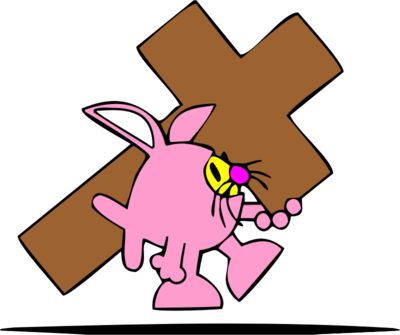 As a child I looked forward to getting that Easter Basket full of candy.  Nothing better than a gift, especially candy, when you're a child.  All that candy gave me the energy to survive having to dress "special" for church, set through an extra long worship service, and eat with family members you might only see once a year, often ending in arguments on religious teachings.

Children across the globe have no choice but to absorb the culture and teachings pounded into them.  They absorb them like a sponge.  The Christian vs. Muslim conflict we know today is the result of that.  So as a child, I believed in the Easter Bunny and the Resurrection of Jesus Christ with that sublime blind faith on the same day.  It was magic!  I pulled a rabbit out of a saviors crown of thorns.

As my rebellious teen years set in...and not one to shy away from controversy, I began to question everything I was taught about religion.  Questioning is the first order of learning.  A gift that keeps on giving, whether that would be more knowledge, a black eye...or more than likely both.  By the end of my teens I didn't believe in the Easter Bunny or cared much for the strict religion taught at my church.

My college years began to open doors to a freedom of thought I never experienced before. Different ideas, different religions, different races and cultures, far removed from that small Southern Illinois community that formed me as a child. I once again opened up my mind and soaked in all that knowledge like a sponge. Then came the mother of all classes to fulfill my history minor...the History of World Religions.

I was floored to learn the similarities between ancient (which many call Pagan) and modern religions, the plundering of ideas and theologies from one to the other.  I began to see religion as both totally useless and the fulfillment of human desire since the beginning of time.  I began to see the common thread that united them all.  I began to see how religion is used to control others, or as a way to free the seeker on his spiritual journey through life. I became like a Pulsar, bouncing from one extreme to the other...almost ready to explode as I assimilated the facts learned in the class with the ideology I was taught during my first 18 years on the planet. That began a period where I made reason over faith my religion.  Factual knowledge, based on historical evidence.

Here are just a few facts about pulling a rabbit out of a saviors crown of thorns:


I realize now that diversity of ideas and theologies are indeed united in our raw human need:

This day after Easter I am reminded of my college history professor saying, "It's a terrible thing to be young and stupid." I'm also reminded of what my priest said at Mass yesterday, "Easter is not about focusing on a life after death or the miracle of the cross, it's about giving us hope to focus on living life to it's fullest right now."

I realize that reason and faith can coexist, that humanity and divinity are one, that we are all united through our diversity.

I am resurrected every day...every moment...every opportunity to connect and engage the world around me.  I am unified with all the living souls who have lived before, during, and after my brief existence here.  I smile as I see children grabbing their Easter Baskets and begin their journey of discovery just I did those many years ago.

Sir Hook "The Divine in Progress" of Warrick