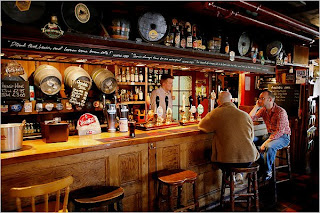 I began reading the New York Times on Sunday's because my local paper has become nothing but an ad rag. Not that I'm against advertising, since that is in part how I make my living, but I digress. I discovered this article, by Jonathan Player, about a Pub crawl in Oxford, home of Sir Dayvd of Oxfordshire. I found it to be not only interesting, but also supporting to why the Knights of Moleskine, Spirit and Ale came into being. Below is the article in full. I have taken the liberty to bold the type I found to be most profound. We'll defer to Sir Dayvd about its accuracy. All I know is that it made me want to visit Oxford, open a real Pub and feel blessed that we made the Knights of Moleskine, Spirit and Ale a reality. Enjoy and Cheers! Sir Hook of Warrick

R. JOHNSON declared a tavern seat “the throne of human felicity.” A good pub is a ready-made party, a home away from home, a club anyone can join. Some British pubs began as simple meeting places, some as coaching inns — hostelries where stagecoaches stopped for the night for fodder, bed and stable. Generally these were larger, and had a secondary pub at the back for ostlers, farriers and other riffraff.

In Oxford, which has some pubs — like the Bear, on Blue Boar Lane, and the Mitre, on the High Street — that date back to the 1200’s, many of the names echo the Middle Ages. The White Hart (a stag, Richard II’s heraldic emblem), the Kings Arms (named for James I, during whose reign neighboring Wadham College was founded), The Bear, the Wheatsheaf: all are names that call up a past of knights, farms and forests.

A pub is a great leveler — not a workingman’s club, but an everyman’s club. The best are filled not only with the scent of yeast and hops, but also with banter and wit. Back in 1954, when the Rose and Crown on North Parade Avenue in Oxford was threatened with closure (inadequate toilet facilities), the defense that won the day called it a “home of cultured, witty and flippant conversation.” Whether it’s how to warm plates swiftly or use the hyphen correctly, there’s no talk like pub talk. Some, like the Rose & Crown, are a kind of family. Its landlord, Andrew Hall, knows exactly how much to know of his regulars’ business. But every well-behaved person who is neither a dog nor a politician is welcome too.

The Rose & Crown is an ideal pub. Half a mile north of the city center, it’s only 140 years old, but the three small, wood-paneled rooms and the affable, eloquent host make it a home away from home. It also keeps the best pint of Old Hooky in town. Brewed about 20 miles away at Hook Norton, said to be the country’s last “steam brewery” (i.e., very old-fashioned), it’s a legend in the annals of real ale, a vessel of hazel clarity, redolent of harvest stubble lit by an evening sun, of woods drenched in rain, of dewy meadows at dawn, of cattle in dells, of Thomas Hardy and sandy-gray churches nestled in the nook of sheep-studded hills. If this isn’t the drinkable essence of England, nothing is.

Some say the pub is in crisis. A few years ago, The Guardian reported that for the first time since the Norman Conquest fewer than half the villages of England have a pub. Chains of horrendous corporate-owned “vertical drinking establishments” — giant Identikit bars — threaten the real pubs, and the real pubs are mostly owned by equally horrendous “pubcos,” companies invented to dodge laws against brewing monopolies. Yet somehow real ale, championed by Camra (the Campaign for Real Ale), and real pubs do survive.

A chap at the back bar of the Kings Arms, with long hair, sports jacket (slight rip in shoulder seam) and a pint of Waggle Dance at his elbow, is holding forth about Bulgaria “I’ve always loved the country,” he drawls — then about Falstaff. Some say the death of Falstaff in Shakespeare’s “Henry V” symbolizes the death of merry old England. In come the Protestants, out go the bibulous friars, jolly yeomen and Mother Mary. After that, only in the public house did the Middle Ages continue to find shelter.

The Kings Arms is a linchpin of Oxford life. Situated at a junction in the heart of the city, it has spacious, airy front rooms, and at the rear three or four small rooms, all thick with honey-colored wood and irregular in shape. It was founded in the early 17th century when adjacent Wadham College was being built (the landlord presumably hoping for trade with the masons). It used to be host to bare-knuckle and cudgel fights, almost to the death, in its courtyard.

The Bear, tucked down Blue Boar Lane at the back of Christ Church, has only two tiny wood rooms, which date from 1242. They are covered, wall and ceiling, with picture frames containing short pieces of ties. Ties of clubs, regiments, schools — the Royal Gloucester Hussars, the Imperial Yeomanry, the Punjab Frontier Force, Lloyd’s of London Croquet Club — telling of an older, more powerful, more sedate England. Croquet, beer, cricket, empire and P G. Wodehouse: a snip off your tie, and you’ll get a free pint.

The small Eagle and Child on the broad boulevard of St. Giles’ was for decades distinguished mostly by the coziness of its nooks, and by the fact that — like its counterpart across the road, the Lamb & Flag, where Graham Greene liked to drink — it has long been owned by St. John’s, a college of spectacular wealth. But in the last few years, since the “Lord of the Rings” movies, it has become a celebrity among pubs. It was here that the Inklings (Tolkien, C. S. Lewis and others) would meet of a Tuesday to drink, talk and smoke.

On a summer evening, when green-filtered light from the trees floods in through the front windows and the sheen on its paneling is restful on the eye, it’s both dark as a hovel, yet struck through with daylight. But alas, the nooks were clearly made for smoking, and feel denuded now that a smoking ban began last summer. These oak rooms without smoke? Any writer of the 19th or 20th century — Tolkien, Lewis or whoever — without pipe, cigar or cigarette? Unthinkable. Unwritable.

There’s no mistaking the age of the Turf Tavern. Its string of low-beamed, stone-walled rooms could be straight out of Chaucer. But what really makes it is its three gardens. In one, beside the cottages of Bath Close, you could be in a Cotswold village, with flower boxes and black beams. The other side, you’re deep in the shade of the ancient city wall, erected against the Vikings. You can hardly tell if it’s 2008 or 1408. You hear no cars or TVs, only the babble of voices softened by ale and nighttime. How many centuries have people hungry for learning, for the book, sat here under the walls swigging jars of ale? On a summer night, with the sky stretched over the stones of Oxford, history becomes a living stream of Ruddles and Theakstons, Hook Norton and Feathers.

Here, allegedly, Bill Clinton didn’t inhale. Here, too, Bob Hawke most affirmatively did swallow a yard of ale (two and a half pints) in 11 seconds, securing a place in the Guinness World Records, as well as (later) the Australian premiership.

One could crawl on and on. There’s Old Bookbinders down in the canalside neighborhood of Jericho, a stone’s throw from Castle Mill boatyard (threatened with imminent development), which inspired Phillip Pullman to create the Gyptians boat people in “The Golden Compass.” At Bookbinders, the ales are kept in barrels behind the bar, and you can reach into a tub for free handfuls of ground nuts. There’s the Gardeners of Plantation Road, with its armchairs and two wood rooms, and the best vegetarian food in town. Not to mention the Trout on the river, the Grapes in the center, the White Horse, and the little Half Moon by Magdalen Bridge. Oxford: what a surfeit of good will in its honey-gold stone and nut-brown glasses.