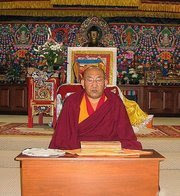 Thank you Sir Richard of Windsor for bringing this story to our attention. Yes, right here in Indiana, the home of Diversity, between red neck right wing wacko's and left wing liberal blow hearts sits a Tibetan Buddhist Monastery. How's that for finding your center?!

Tibetan monks carve out new home in US heartland

In the rolling hills of Indiana, Tibetan monks pray for their homeland. They have little hope of returning.

While their spiritual leader, the Dalai Lama, tours Western nations in hope of drumming up support for Tibetan autonomy, these ten monks work to keep their culture alive in exile.

They tend the lush grounds dotted with two stunning stupas and a scattering of Mongolian yurts, teach meditation, hold regular prayer services and introduce curious locals and tourists to the art, architecture and music of their homeland.

Founded by the Dalai Lama's brother, the Tibetan Mongolian Buddhist Cultural Center is now run by the most senior religious leader to leave Tibet in decades.

That ended in 1998 when he was told to tutor the Panchen Lama selected by Beijing to replace the child chosen by the Dalai Lama.

Rinpoche, 58, fled to the United States where his is free to air his true feelings about the Chinese rulers.

"His holiness, the Dalai Lama, the Chinese people need a leader just like him," Rinpoche told AFP.

"The Chinese government, the communist government, is very much afraid of that," he said as he sat in the center's colorful temple.

Rinpoche denounced the March crackdown on Tibetan demonstrators and the government's attempt to cast it as an ethnic conflict rather than a struggle for democracy.

China's reaction to the Tibet unrest drew international condemnation and heaped pressure on Beijing ahead of the Olympic Games in Beijing in August, with activists disrupting the global relay of the Olympic torch.

Beijing says Tibetan "rioters" and "insurgents" killed 21 people and accused the Dalai Lama of being behind the violence and fomenting trouble ahead of the Olympics.

Representatives of the Dalai Lama held talks this month with China to try to defuse tensions and the exiled spiritual leader on Wednesday urged Tibetans not to disrupt the Olympic torch relay when it passes through Tibet on its way to Beijing.

Rinpoche said he is grateful for the pressure from the international community, but has little hope that the talks will lead to lasting change.

In the meantime, Rinpoche will focus on the center, which had fallen into disrepair and debt after its founder, the Dalai Lama's brother Thubten Jigme Norbu, had a series of strokes in 2002.

Norbu still lives at the center but rarely meets with visitors or gets involved in activities because he has been so weakened by the strokes.

Norbu had taken a more hard-line attitude towards Chinese rule than his brother, who is careful to demand only greater autonomy rather than independence.

After working for years as a representative for the Dalai Lama and the Tibetan government in exile, Norbu founded the cultural center in 1979 on donated land near Indiana University, where he taught Tibetan studies.

In 1995, he co-founded the International Tibet Independence Movement outside of nearby Indianapolis, which is how Tenzin Namgyal, 35, became involved with the cultural center.

Born in Bhutan, Namgyal immigrated to the United States to study human rights and international law in the hopes of working towards freeing his homeland.

Mindful of the center's non-profit tax status, Namgyal is careful to keep politics outside his official duties, especially since Rinpoche also follows the Dalai Lama's middleway approach of pressing for autonomy rather than complete independence.

However, he regularly leaves the center to sit on panels and raise awareness about the situation in his homeland.

"It's really frustrating and sad because the Chinese people themselves don't have access to all the information they should have," Namgyal said over a cup of tea.

The Chinese students he meets in the United States often have distorted views of Tibetan Buddhism - some even say the monks kill innocent people to use their bones in ceremonies.

Sometimes Namgyal is able to change their minds. He hopes they will bring that new understanding home to their families.

We all hope so too! As Sir Richard says, "Buddha didn't come as a Savior, but as a teacher. I think that we have a lot we can learn from the Buddhist."