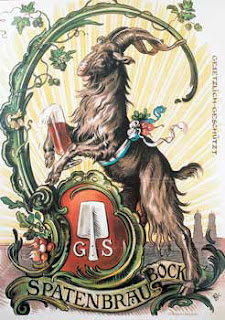 Today is the first day of spring –

Time to fly a kite in the cumulus sky and kick over some young daffodils.

I'd always heard that bock beers meant “bottom of the barrel.” Not true according to some research on www.worldclassbeverages.com

“Bocks were traditionally brewed at the end of the brewing season (late winter or early spring), so they were the last beer of the season to be brewed. (Before refrigeration, brewing season ended once the temperatures got too high for brewers to keep yeast.) For this reason, many people believe that Bock beers are from the "bottom" of the brewing tank, or that they are the leftover sediment from other brews. Of course, this is not the case in modern brewing.”

What's in a name? The name Bock actually comes from a corruption of the name Einbeck (The German city that is the origin of bock beers).

And what about the goat that is the “universal symbol” for bock beers? The answer is that the German word for Billy-goat is also "bock," so Bock beers have adopted the Billy-goat as their official symbol.

Beer and Lent: “During Lent, the forty days prior to Easter, fasting is common, but beer is brewed from ingredients that are not prohibited during Lent, so Bock beer became a popular source of sustenance during the Lenten season.”

Want a double goat kick? Try a doppelbock. “The word doppelbock literally means "double bock" and while today's doppelbocks are essentially twice the strength of regular bocks, the doppelbock style originated completely separate from the bock style. In all likelihood, the original version of the beer that the Germans called "doppelbock" was somewhat different from the style of beer we know today and over time, it evolved to become the beer we know.”

Again, more enlightenment and more science of bocks can be found at:

Here's to spring and your favorite bock.