The Interface of Science & Religion 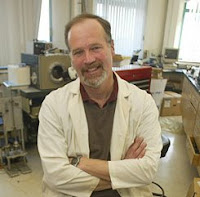 I attended a lecture Tuesday evening at the University of Southern Indiana by Kenneth Miller, from Brown University.

His lecture was on Darwin, God & Design...America's Continuing Problem with Evolution.

Miller is picking up where Theodosius Dobzhansky left off. Dobzhansky was a Russian immigrant to the United States who in the 60's helped to further the discovery of mutation of genes as the catalyst for natural selection in evolution.

Dobzhansky was also a devout member of the Eastern Orthodox Church who said, "I am a Creationist and an Evolutionist. Evolution is how God chooses to Create."

In his lecture Miller stressed that, "Science doesn't trump religion and religion doesn't trump science. Evolution is the interface of science and religion." He also said, "You are a descendant of primates whether you acknowledge it our not." 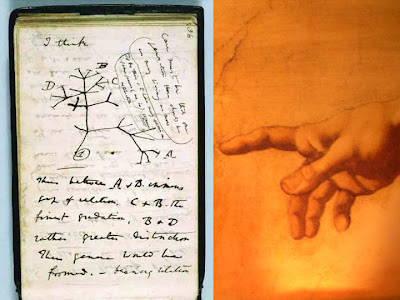 Miller became involved in two of the country's most vivid Federal trials, Georgia in 2004 and Pennsylvania in 2005, where the leaders of the Creationist movement tried to replace the teaching of Evolution in public schools as scientific fact with their argument for Intelligent Design. In these trials the Judge, a Republican appointed by George W. Bush, when presented with the arguments from both sides declared that, "Intelligent design is a religious doctrine disguised as science and therefore can not be taught in public schools."

School Board elections during 2006 in Ohio and Kansas also sought unsuccessfully to replace rational thought with intelligent design. During the elections they would present their candidate as: "If you believe in God, Creation and True Science vote for our candidate...if you believe in Evolution, Abortion and Sin vote for theirs."

Now, I'm no doubt a sinner, but I also believe in Evolution as Creation, God and True Science...in my case Evolution. In marketing terms they had a very weak "positioning statement".

Miller presents that Creationist use two main weapons to battle Evolution.  First is intentional distortion of scientific fact.  This is made evident in stressing that the earth is only six thousand years old, or in the above election position of equating Evolution with Abortion and Sin.  Second is the fear of Evolution itself. This fear is based on the premise that if we are a species because of gene mutation, a mistake, there would be no need for morality, no purpose, no meaning to our lives. In effect if we weren't created from the beginning as we are, in God's image, there is no need for religion. How shallow a faith that is!  I believe that all life evolves and that all life reflects the essence of God.

Miller wrapped up his lecture by presenting that science accepts that the origin of nature must have another source. To non-believers this would be the discovery of what set this into motion. To believers that source is God. He quoted C.S. Lewis who said, "God likes matter. He invented it!"

Miller concluded with how long this argument as been around.  St. Augustine of Hippo, one of the Doctors of the early Church, in 411 AD wrote in his book, "On the Literal Meaning of Genesis", excellent advice for all Christians who are faced with the task of interpreting Scripture in the light of scientific knowledge.

"Usually, even a non-Christian knows something about the earth, the heavens, and the other elements of this world, about the motion and orbit of the stars and even their size and relative positions, about the predictable eclipses of the sun and moon, the cycles of the years and the seasons, about the kinds of animals, shrubs, stones, and so forth, and this knowledge he hold to as being certain from reason and experience. Now, it is a disgraceful and dangerous thing for an infidel to hear a Christian, presumably giving the meaning of Holy Scripture, talking nonsense on these topics; and we should take all means to prevent such an embarrassing situation, in which people show up vast ignorance in a Christian and laugh it to scorn. The shame is not so much that an ignorant individual is derided, but that people outside the household of faith think our sacred writers held such opinions, and, to the great loss of those for whose salvation we toil, the writers of our Scripture are criticized and rejected as unlearned men. If they find a Christian mistaken in a field which they themselves know well and hear him maintaining his foolish opinions about our books, how are they going to believe those books in matters concerning the resurrection of the dead, the hope of eternal life, and the kingdom of heaven, when they think their pages are full of falsehoods and on facts which they themselves have learnt from experience and the light of reason? Reckless and incompetent expounders of Holy Scripture bring untold trouble and sorrow on their wiser brethren when they are caught in one of their mischievous false opinions and are taken to task by those who are not bound by the authority of our sacred books. For then, to defend their utterly foolish and obviously untrue statements, they will try to call upon Holy Scripture for proof and even recite from memory many passages which they think support their position, although they understand neither what they say nor the things about which they make assertion."
Christianity teaches that lying is a sin.  It is more than ironic that the lie of intelligent design is supported by those who profess the Christian faith.  Darwin's God is the same God as their God...unlimited as life continues to evolve.