What kind of man wears a “Drink Like A Champion Today” t-shirt? 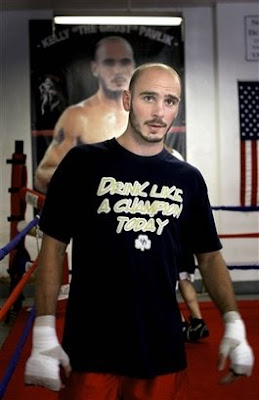 How about the Middleweight Boxing Champion of the World!

This past weekend Sir William of Keglers and I drove 500 miles (each way) to Sir William's hometown of Youngstown, OH to witness the Middleweight Championship fight between challenger Marco Antonio Rubio and the defending champion Kelly “The Ghost” Pavlik.

Youngstown was once one of the world's leading steel towns. Then the late 1970s hit as hard as one of Pavlik's punches: several major companies shut down with nearly 40,000 workers losing their jobs almost overnight. The city hasn’t recovered.

But as I drove through Youngstown, taped on the walls and plastered over the windows, are signs of hope - pictures and newspaper clippings of the hometown hero who, as one paper put it, "seemingly has lifted all of the Mahoning Valley onto his slender shoulders."

"Kelly Pavlik means everything to Youngstown," says Lori Greenwalt, who runs the members-only club where Pavlik often retreats to throw darts. "It's tough here and he gives people hope."

The south side, where the 26-year-old champion lived growing up, has a rough reputation. The crime rate is nearly twice the U.S. average, stemming from organized crime that dominated much of the city decades ago to the more recent influx of drugs and random violence.

Sir William and his family know Pavlik through Mike Cox. "There are places you definitely don't want to go," says Cox, one of Pavlik's childhood friends and a police officer in Youngstown the past 10 years. "I try to take a positive look on things, but there are guys on the force who'll say, 'This place is miserable."'

"Sure, it's a struggling city, but right now the whole country is struggling," says Pavlik, who defended his WBO and WBC belts Saturday night against top contender Marco Antonio Rubio at the downtown Chevrolet Centre.

"My dad was brought up here, I've always been around here," he adds. "I've lived in Youngstown my whole life. It's where I'm from."

It's obvious that all of Youngstown loves him for it, too.

They love that he still sleeps on his parents' couch when he's training, and still works out at the Southside Boxing Club with Jack Loew, a driveway sealer by trade who has somehow managed to mould a middleweight champion. They love that he proudly represents a city that so many others resent.

"He's a prototypical guy from there. He's tough, the way he fights, he just attacks the guy he's fighting. He packs a big punch. He's been someone the people of Youngstown are real proud of."

Pavlik has a tattoo at the base of his neck that reads "Lift Our Spirits," with a picture of a crying angel hugging the world. It serves as an ever-present reminder of what he means to the city, as if he could possibly forget. 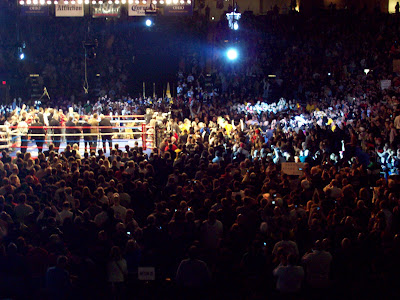 So it was that Sir William, dozens of his family and friends, and yours truly stood shoulder to shoulder with 7,000 cheering “Ghost” supporters as Kelly Pavlik launched into a convincing attack against Marco Antonio Rubio, 42-5-1 (38 KOs).

He picked his opponent apart over nine rounds before Rubio quit on his stool before the start of the tenth. 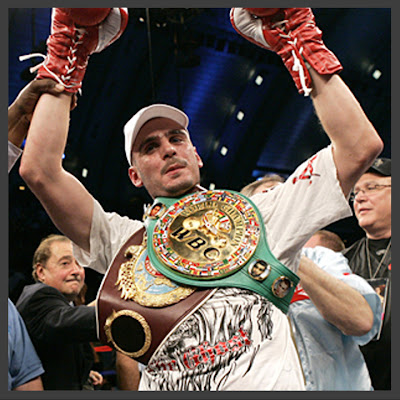 There’s more to this trip than just the fight: A tour of Sir William's “old stomping grounds,” visits with an aunt and uncle, and a day of Bochi Ball – an Italian favorite. 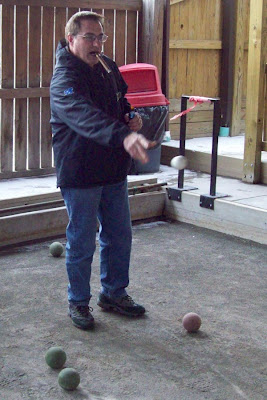 For now, I just wanted to give you “Rocky-like” story that is helping lift the spirits of Youngstown, OH.