Thoughts with Sir James of Taylor 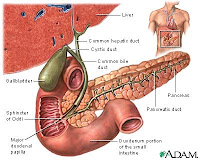 Today our own Sir James of Taylor is 'going under the knife." Well, I can't exactly say that in this day and age of laparoscopic surgery, but you know what I mean. Seems that Jim has a gallbladder that's been giving him fits and they're going in today to remove it.

I asked if they would save it for him in a bottle -- you know, something that he can put on his mantel and show friends at his next party. Turns out that the Centers for Disease Control won't let a person keep part of his own body. I guess they don't want a gallstone pandemic spreading through populations of people who see it on Jim's mantel.

Anyway, here are some gallbladder facts I dug up (since I really didn't know what the function of this beast is): The gallbladder stores about 50 ml of bile, which is released when food containing fat enters the digestive track , stimulating the secretion of cholecystokinin (CCK). The bile, produced in the liver, emulsifies fats and neutralizes acids in partly digested food.

So, brother Jim, we're thinking of you today. Perhaps tonight we'll even toast your new-found health.