Don't judge a pub (or its patrons) by its cover 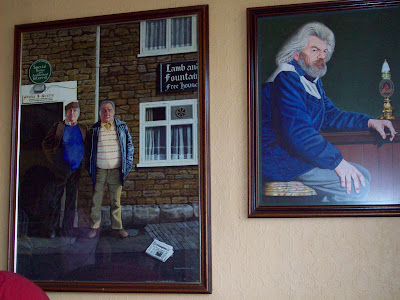 Above: A couple of portraits of past Lamb and Fountain patrons who have passed on to pubs beyond our realm -- a great tradition.


I have to give some serious cheers to Sir Hook and Sir Davyd for the bang-up job they did planning our recent once-in-a-lifetime voyage around England. Having said that, I also have to give them and the ladies credit for taking advantage of some spontaneous “off-the-beaten-cobblestones” adventures.

For example, while at our mid-trip home base pub -- The Woolpack Inn, Beckington -- Sir Hook(Wells) of Warrick engaged in a conversation with some of the locals. They informed Sir Hook that some of his ancestors hang out at a certain pub a few mile away in Frome. We were soon off and running.

Frome, as it turns out, is all uphill (at least that’s the way it seemed after a couple of pints of hard cider). We soon found ourselves huffing and puffing up a steep grade away from the main road and the mainstream. Out of breath (speaking only for myself), we announced ourselves at the Crown & Sceptre on Trinity Street.

A rather small crowd immediately gave us what seemed to me like the “evil eye.” It’s not that we felt too uncomfortable, but one drink and we were out the door. Fortunately, Sir Hook did meet one of his clan and, to Sir Dayvd's surprise, the fine chap didn't sport six fingers or webbed toes (not that we saw).

Stumbling down the street, we happened on The Lamb and Fountain on Castle Street. Having never met a pub we didn't love (and needing another respite) we stopped. The Lamb is truly an original “public house.” The bar divides two separated rooms – one in the front with lots of messages from “mom” (the owner) and the back room with a fantastic view of the town and countryside. 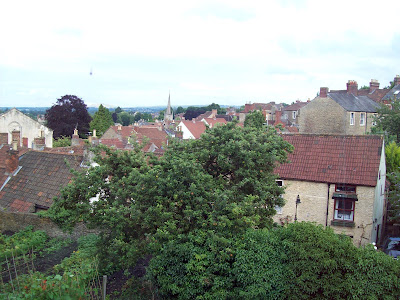 While enjoying yet another pint, in comes a rather intimidating (at least to me), rough and weathered local we had seen at the Sceptre. Like the American TV show “Cheers,” everybody knows his name: Mick (he introduced himself to us at Michael, but he’s known as Mick) didn't hesitate to engage us.

Mick turned out to one of the nicest guys we met on our trip. He told us that his grandfather first took him to the The Lamb and Fountain over 50 years ago and he’s been a regular ever since. Mick enthusiastically showed us a couple of his favorite traditional English pub games:
Table Skittles (yes, he beat me) 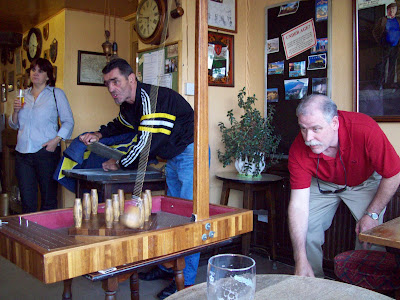 And he re-introduced Sir Dayvd to Shove ha'penny. 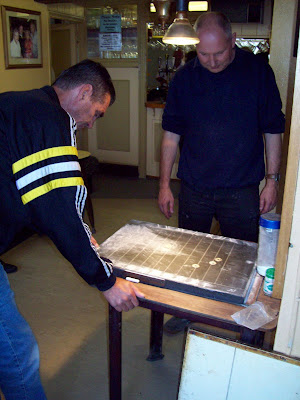 Mick treated the ancient slate with an awe inspiring reverence. It has, he tells us, been in the same spot for decades. 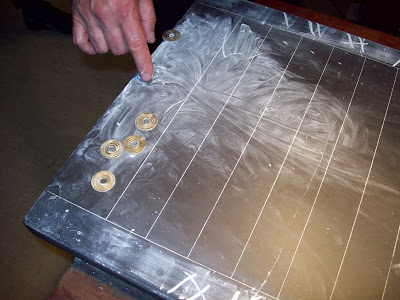 There is a lot to be said for old traditional pub games that require no AC, monitors, flashing lights, and sound effects. Sometimes, nay, most of the time, it’s just more enjoyable to share a time-honored low-tech game and a good pint with old and new friends.

So, the next time your in Somerset make sure you make an unscheduled stop off the beaten cobblestones of the main tourist street of Frome and ascend to the Crown & Sceptre or The Lamb and Fountain. Oh, and please tell Mick that we’ll never forget his wonderful hospitality – and that he created one of the most enjoyable times we had in any pub in England.