It seems that President Obama has taken the Knights lead and decided to start holding "Beer Summits" to solve the world's problems (see yesterday's post). Good for him. What better way to clear the air and have some thoughtful conversation (though I don't know how merry the White House Suds Summit was, it's a start). And if happy hour at the White House is what's needed to create solutions -- i.e. health care bill doodled out on a bar napkin -- then all power to the President. 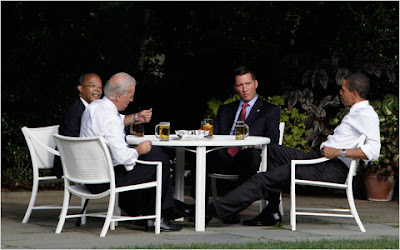 Yesterday, President Obama knocked back some cold beer in the Rose Garden with Harvard professor Henry Louis Gates Jr. and police Sgt. James Crowley of Cambridge, Mass., the two men at the heart last week of a heated debate over race in America.

For some odd reason, Vice President Biden (a teatotaler) also joined them.

"I have always believed that what brings us together is stronger than what pulls us apart," Obama said. "I am confident that has happened here tonight, and I am hopeful that all of us are able to draw this positive lesson from this episode."

And what exactly did they talk about? I have no idea. Of course, what's really paramount is: What beer they chose to drink!

So, this morning I put on my investigative Sherlock Holmes Deerslayer Hat and started making phone calls to high level officials (okay, I just googled it).

On this great day in history, a waiter delivered mugs of beer -- along with peanuts and pretzels, of course -- to the men, who sat at a small table in the Rose Garden.

Vice President Joe Biden, a surprise addition to the gathering, requested Buckler, a non-alcoholic beer (and a Dutch import, no less).

President Obama wielded a Bud Light, straight out of St. Louis by way of a Belgian-run behemoth. (that choice, by the way, has upset many beer enthusiasts). 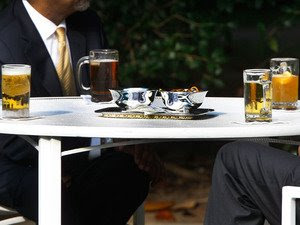 I say: Don't judge the "Suds Summit" or the beer choices -- Unity Through Diversity!