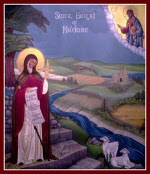 Today is the first "Official Celebration Day" of the Knights of Moleskine, Spirit and Ale. It was a mere three months ago that our Council of Founders decided to make Saint Brigid our official Patron Saint, mostly on the advice of one of our favorite Irish bartenders at Ri Ra's, Sinead.
Known as "the Mary of the Gael," Brigid founded the monastery of Kildare and was known for spirituality, charity, and compassion. St. Brigid also was a generous, beer-loving woman. She worked in a leper colony which found itself without beer, "For when the lepers she nursed implored her for beer, and there was none to be had, she changed the water, which was used for the bath, into an excellent beer, by the sheer strength of her blessing and dealt it out to the thirsty in plenty." Brigid is said to have changed her dirty bathwater into beer so that visiting clerics would have something to drink. Obviously this trait would endear her to many a beer lover. She also is reputed to have supplied beer out of one barrel to eighteen churches, which sufficed from Maundy Thursday to the end of paschal time. A poem attributed to Brigid in the Brussel's library begins with the lines "I should like a great lake of ale, for the King of the Kings. I should like the family of Heaven to be drinking it through time eternal." Next official celebration day is our Founding, Cinco De Mayo. We're planning a big party in 2009.
Here's to you and your health!
Sir Hook of Warrick
Sir Hook
Posted by dkWells