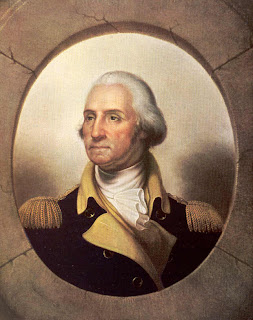 Today we toast George Washington's Birthday. Born in 1732 into a Virginia planter family, he learned the morals, manners, and body of knowledge requisite for an 18th century Virginia gentleman.

A couple of things you have to admire about George Washington is that he didn't let defeat keep him down and he enjoyed a good beer.

I'll start at a little dot on the map called Ft. Necessity. The confrontation at Fort Necessity in the summer of 1754 was the prelude to the war fought by England and France for control of the North American continent. The struggle was known in North America as the French and Indian War and spread around the world as the Seven Years' War. The action at Fort Necessity was the first major event in the military career of George Washington and he had his butt kick -- entirely because of his own ignorance. It was the only time he ever surrendered to an enemy. But, he got back up to help defeat the French (this is where you on the other side of the pond can cheer).

Turn the page a few years...

In 1775, The Second Continental Congress, meeting in Philadelphia, appoints Washington commander-in-chief of the Continental Army. Well, I'll let your read the rest of his amazing story for yourself.

So, with what beverage do we toast the general and first president of these U.States? It turns out that's an easy decision, because our first president had a definite preference when it came to beer. He loved the English style of beer known as porter and ordered them by the gross to keep Mount Vernon well stocked -- American brewed porter. "We have already been too long subject to British prejudices. I use no porter or cheese in my family, but that which is made in America: Both these articles may now be purchased of an excellent quality."

And it turns out that Washington was also a "home brewer" himself. Here is his recipe for small batch beer:

Take a large Sifter full of Bran Hops to your Taste -- Boil these 3 hours. Then strain out 30 Gall. into a Cooler put in 3 Gallons Molasses while the Beer is scalding hot or rather drain the molasses into the Cooler. Strain the Beer on it while boiling hot
let this stand til it is little more than Blood warm. Then put in a quart of Yeast if the weather is very cold cover it over with a Blanket. Let it work in the Cooler 24 hours
then put it into the Cask. leave the Bung open til it is almost done working -- Bottle it that day Week it was Brewed.

So today Knights, let us toast to George Washington. It's a perfect time to sip a porter and reflect on where we are and where we came from.