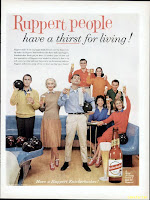 A good friend of mine owns a bar. I was introduced to him and his establishment, Legends, around two decades ago. For years I would sit at the bar and watch people walk up to a little window behind the bar, order drinks, and then wander away. Where were these people coming from? What were they doing over on the noisy side of the wall? Why were they wearing such funny looking shirts?

It turns out that there was a bowling alley attached to the bar. Bowling?

I don't know exactly how it happened, but somewhere along the line I got too old to play softball and Bill (soon to be knighted Sir William of Kegglers) invited me to bowl on his Monday night league team. Having never bowled before, I hesitated.
"You like to drink beer?" asked Sir William.
Yes, I did have to admit that.
"You like hanging around with the guys and drinking beer once a week, don't you?"
Yes, I did have to admit that, too.
"I'll see you Monday!"

That was several years ago and ever since then I've met a long line of kegglers, characters, and many new friends. I've learned that bowlers -- like Knights -- are a Diverse group. They leave the world of engineering, sales, music, advertising (just to name a few) and enter a world of Unity -- trying their best to knock down pins and knock down beers. The guys on my team are no exception. But, are they Knights? After all, I don't know them to journal and I don't know them to enjoy a variety of ales and lagers; However, I do know them to be exceptional in quality and to be very merry -- especially after winning a quarter (quarter of the year-long tournament, not a coin) like we did last night.

Like the Guiness Ad campaign states: "Good things come to those who wait."

Here's to the good Sir William of Kegglers, Sir Cock of the Walk, Sir Allen of Wall, and Sir Norman (Norm) of William Nottingham. Congrats on winning the quarter and becoming Knights.

The next time you're in Evansville, Indiana, stop in to River City Recreation and say hi to Sir William of Kegglers. And, if you're out on a Monday night after 8:45 p.m., stop in and buy us a round!