The Blue Max and Mom 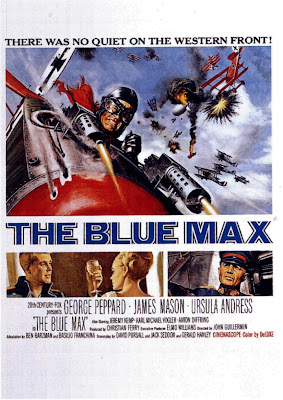 The movie is, in my humble opinion, one of the greatest war flicks of all time!

It's the WW1 story of German fighter pilot Bruno Stachel (George Peppard) who becomes a flying officer after a couple of years in the trenches. Most of the officer corps comes from Germany's aristocratic elite and Stachel feels out of place. This does not dampen his ambition and single-minded pursuit of his goal: to be awarded the Blue Max given for shooting down 20 enemy planes (though I've read the historical accurate number was 16).

Turn the page a few years and you'll find me with my family at the U.S. Airforce Air Museum in Dayton, OH (At least that's where I think we were). Anyway, there in the museum gift shop was a replica of the Blue Max. I was overcome with a single-minded pursuit of purchasing the medal, but I knew that it would exhaust every penny of my limited vacation money; being a frugal German, I left it in the case). Heartbroken, we left the museum, piled into the car and headed home. Somewhere down the road the regret overcame me and I couldn't hold in my grief. Tears flowed like a baby sprayed with mace (where did that come from?). When my parents asked what was troubling me (Probably more like, "Why the hell are you crying?!") I told them how much I really wanted the Blue Max. I'm sure my dad said something like, "We're not turning the car around!" and my mom yelled, "Tough! Now stop crying!"

Christmas that year I found a small box under the tree with my name on it. I'm pretty good at guessing presents; however, this one had me completely puzzled. You can probably guess the rest of the story: I opened it and found, to my surprise, a big button that read...

Okay, no it wasn't. It was the Blue Max. When we got back from vacation, my mom phoned the museum and ordered it (pre-internet days).

I still have it -- hanging on my original Blue Max movie poster in my office.

I was reminded of this story because this day in history(from History.com:

In the skies over Vauz sur Somme, France, Manfred von Richthofen, the notorious German flying ace known as "The Red Baron," is killed by Allied fire.

Richthofen, the son of a Prussian nobleman, switched from the German army to the Imperial Air Service in 1915. By 1916, he was terrorizing the skies over the western front in an Albatross biplane, downing 15 enemy planes by the end of the year, including one piloted by British flying ace Major Lanoe Hawker. In 1917, Richthofen surpassed all flying ace records on both sides of the western front and began using a Fokker triplane, painted entirely red in tribute to his old cavalry regiment. Although only used during the last eight months of his career, it is this aircraft that Richthofen was most commonly associated with and it led to an enduring English nickname for the German pilot--the Red Baron.

On April 21, 1918, with 80 victories under his belt, Richthofen penetrated deep into Allied territory in pursuit of a British aircraft. The Red Baron was flying too near the ground--an Australian gunner shot him through his chest, and his plane crashed into a field alongside the road from Corbie to Bray. Another account has Captain A. Roy Brown, a Canadian in the Royal Air Force, shooting him down. British troops recovered his body, and he was buried with full military honors. He was 25 years old. In a time of wooden and fabric aircraft, when 20 air victories ensured a pilot legendary status, Manfred von Richthofen downed 80 enemy aircraft. 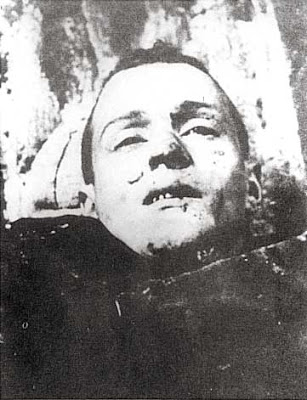 So tonight... I plan to break out my copy of The Blue Max (did I mention it stars Ursula Andress) and toast The Red Barron and... my mom -- who gave me one of the most precious material Christmas gifts I've ever received.