The "learn something new / do something new everyday" ideal is one of my favourite features of the KMSA... but how I wish I had the memory capacity of this little critter, with a brain probably a 20th or more the size of my own grey blancmange. 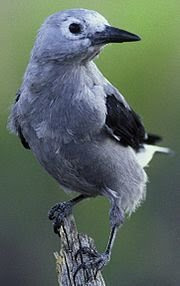 This is a Clark's Nutcracker, named after the American Explorer and map maker William Clark ( a man who lived life to its fullest himself. )

I came across this bird while watching a documentary about Yellowstone Park, and it stood out amongst all the mating elk and lumbering grazing bison, for its remarkable symbiotic relationship that has evolved between it and the White Bark Pine, all over the north of America.

With its evolved beak, it can prize the pine nuts, which the tree itself has evolved to have a tempting 50% fat in them, out of the cones and into a special sac under its tongue, up to 150 at one sitting, a fifth of its body weight. 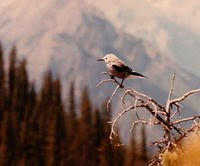 Then it flies, as much as fifteen miles away, over the relatively featureless terrain, and lands to drill the pine nuts into the ground, in sets of 10, placing a small stone on top of the stash to mark the site. ( tho the ground is often littered with small stones )

It goes back for more and more. Over an autumn, a single bird can bury 30,000 nuts over an area of 100 square miles! Come the winter time , it can manage to remember the location of a staggering 70% of these seeds, even when buried under 3ft of snow.

The kick back for the tree is that for every thousand seeds planted 300 hundred get left in the ground to grow.

And so I once again doff my hat and raise a beer to Nature, who's brilliance and wonderment far outstrips my own hunter gathering skills, which consist of opening up the tailgate of the van and throwing in three bags of groceries from the hypermart every week. and whose ecology we as a generation, me included, are dumbly sleepwalking into plowing into the ground after 4.5 billion years of getting here. Now That's Nuts!!