After a week on the road, and in taverns, I found a summer Sunday afternoon free to myself. I'd done the housework and made it good enough for the Queen to visit, loaded the fridge, and generally fried my To Do List. Monday could wait.

It was high summer outside, so I decided to go to explore some of the heritage medieval hay meadows, that have now been turn into nature reserves, between my house and the River Thames to the west.

I'd seen on a nature program, on TV in the winter, about these tracts of flood plain still tucked down by the river, standing the same as when the field workers made hay in them in the 13th Century. In the right season they are a profusion of flowers and I hoped that I'd picked the right weekend.

To reach them on bike I decided to follow the course of the canal by my home, on the tow path, for 3 miles, then bear right to the river.

Before wide roads and motorways, indeed before the invention of the petrol engine, England was criss crossed by a network of canals, on which long barges were towed by horses, carrying every kind of goods imaginable to the various cities, much as haulage trucks do the job these days.

Nowadays the canals are kept in trim by the waterways council, and providing wonderful walks and cycle rides into still beautiful scenery, that teems with wildlife. 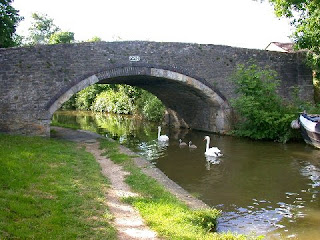 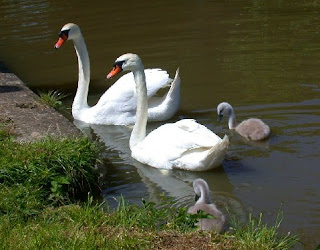 I started my ride at the bridge at the end of my road. The pair of Mute Swans, that roam that section of the canal cadging food from the pleasure boats, had had two cygnets this season, and seemed unusually content now they were growing up.

The Long Boats I passed moored by the banks still provide me with painting work, decorating them in the Victorian canal folk Style they are famous for. This one I painted, still travels up from Oxford to Birmingham, and it was good to see it out on the water. 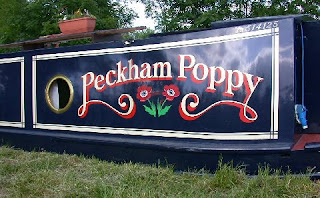 At Duke's Lock about 3 miles down the tow path, I turn along the narrow cut that leads to the River and the Yarnton Meads. 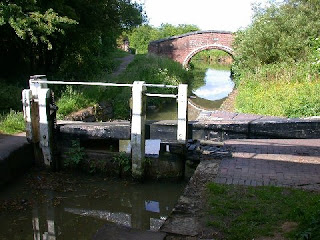 This little used footpath had become overgrown with Stinging Nettles, at which point I slightly regretted wearing the three-quarter length shorts I had on, as my shins took some major hits that I knew would tingle thru the night.

But to get to anything worth while you have to prevail in life, and eventually after half a mile, of beating my way through, the path opened out onto the vast hay meadows that lay next to the river under the upturned bowl of a blue sky. 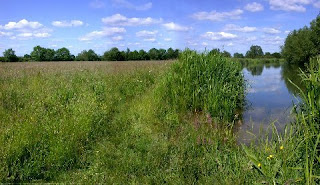 The Bulk of the white daisies and other flowers had passed over, but still there were hundreds of different species amongst the grasses; purples , yellows, scarlet's, like so many hidden jewels. 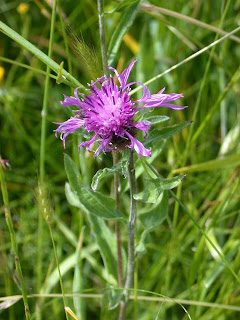 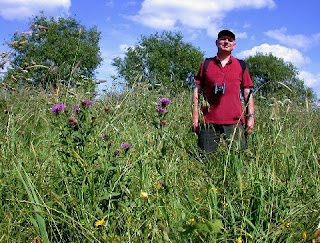 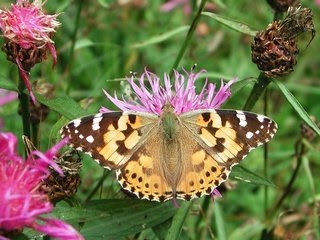 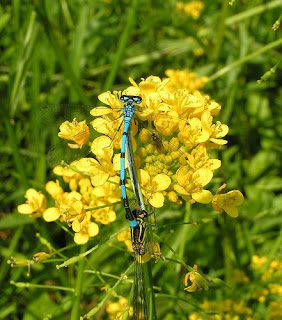 A remarkable example of how an eco-system left as time intended it to, can flourish year after year. As it was a flood plain, development would never ever happen there.

The whole afternoon took me back to my childhood, when as the youngest of the family I used to go off and roam the countryside with my collecting nets and bottles and come home, and unbeknownst to my Mom..keep dozens of creepy crawlies in jars, with foliage, and tiny aquatic creatures in jars of fresh water, in my bedroom, so I could study them and take notes.

I say unbeknownst, but mom's being mom's she'd find out the following day what I had been up too, and everything would eventually be set free.

I read somewhere, that in middle age, we go back to the comfort and happy times ( if we were lucky enough to have them ) of our childhoods. Times when the concept of work, bills and taxes, were as far away as the days were long.

And as I took off my shoes to wade the ford, back to where I'd left my bike, I looked at my toes in the cool water with the sandy bottom, and realized, for a short time anyway, that I was back there. 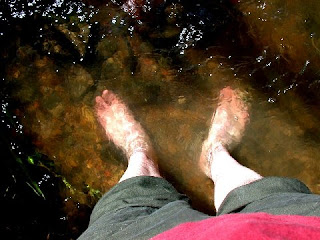