One Life, Six Words, Whats Yours

As regular readers of this Blog may have seen, the Knights and Ladiezz are entranced by the knotty art of Haiku writing... the distilling of a moment into an eternity. But what if you were asked to sum up your whole life ( so far ) in six words? 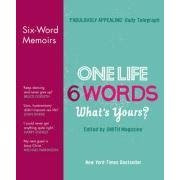 There's a book that caught my attention, called Not Quite What I Was Planning: Six-Word Memoirs By Famous and Obscure Writers. It's from the editors of Smith Magazine, and it's exactly what it says it is -- a collection of memoirs, each just six words long. which led me onto a website dedicated to the whole thing.

The idea stems from a literary legend. The story goes, that in the Twenties, Ernest Hemingway was sitting at the famous 'round table' with several literati at the Alonquin Hotel, New York, when he accepted a $10 bet to write a story in six words. He quickly wrote six words on a napkin and passed it round..: "For sale: baby shoes, never worn." It had a beginning, a middle and an end and it won him the bet

The editors of Smiths Magazine challenged writers to craft their own six-word memoirs, and got some interesting results.

Some of them are funny, others are pretty poignant. There's one that says, "Was father. Boys died. Still sad." That's from Ronald Zalewski.

So all you KMSA out there.... step up to the plate....No need to write us a blog...and we want to hear yours. Sum up your life in six words -- no more, no less. For best results, don't overthink it. And remember, it's supposed to be a memoir, not a fortune cookie.
Me? ummm ......... "Fiftyfour; haven't even begun to start"