I know that some of my ancestors were grape-stompers, but I have no records of brewers gracing our family tree; However, it is possible. The 1868 Business Directory for Indiana lists 12 breweries in Evansville, including:

Fahnley, Kuhn, and Co. At Bunker Hill with an office at 85 Main St.

Yes, Evansville, Indiana does have a rich beer brewing tradition. In fact, Evansville is the oldest continuous brewing city in the state. Rice and Kroener established Evansville's first brewery in 1837 (Yes, I know that is not “old” by East Coast standards or across the pond); Some of the more famous names include F.W. Cook, Sterling, and G. Heilman. 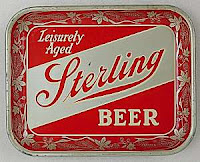 Check out this image of the Sterling Rathskeller (picture taken from a postcard). Early Knights, perhaps?

Sadly, there is but one brewery left; Fortunately, it's a good one.
Turoni's Main Street Brewery is Evansville's only brewpub (Turoni's Pizzery has been around for 30 or so years. The brewery was opened in 1996).

Now, this is where I get to name drop. Ol' 23 Stout pays homage to Evansville native and Yankee great Don Matingly. Don and I played football and baseball together at Memorial High School (Truth be told, I mostly watched him play baseball from the bench – my batting average was about the same as the alcohol content of Ol' 23 Stout).

Jack Frey, Turoni's Head Brewer, has invited the Knights to tour the facility and answer any and all questions about his craft (I'm guessing that his answer to the question, “Do we get free beer for life?” will be “NO!” But, you can't blame a Knight for trying). Details of the road trip forthcoming.

I invite you to read a previous article on Turoni's from our archives: January 19, 2008. (You might have to select January Archive on the left of the screen, or scroll to the bottom of the blogs and click on “older blogs”)

A salute to Evansville's rich brewing tradition, to Jack Frey, and to Turoni's. As their motto states: “Life is too short to drink cheap beer!”*

(*I will confess to enjoying a PBR from time to time)