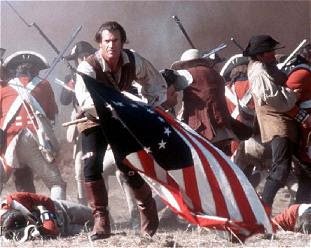 Yesterday I spent the day at a pre-1840 Rendezvous. Part of the mission of the Patoka Valley Muzzle Loaders is to continue the tradition of pioneers and “mountain men.” A Rendezvous is a two day primitive camp that includes shooting matches, tomahawk and knife throws and other raucous games.

While on the primitive woods walk shoot (trying to hit small targets in the woods from 40 to 50+ yards away, I was reminded of something I read in a book by a man named Mark Baker: “Aim small, miss small.”

Mr. Baker, one of the leading historians on early American woods crafts, was the technical advisor on the great movie “The Patriot.” When teaching Mel Gibson and Heath Ledger how to shoot a muzzle-loading rifle, Baker gave them the advice to “aim small, miss small”, meaning that if you aim at a man and miss, you miss the man, while if you aim at a button (for instance) and miss, you still hit the man.

The director loved the concept so much that he had Gibson's character say it in the movie.

I know that we're all trained to think of the “Big Picture” or the “Big Goal,” but I think it's perhaps more important to “Aim Small.” You might not hit it, but you won't miss by far either.

Focus, focus, focus on the details, and you and your customers will hit the mark. 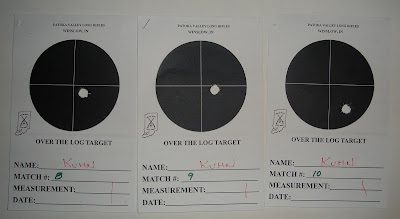 The targets are, by the way, the last three shots at a three inch bull at 40 yards (notice that I didn't include the first seven – it took me a few shots to remember Baker's advice).