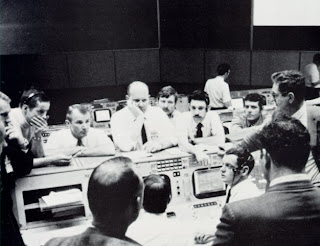 If you work with computers for a living, you've probably experienced that occasional crash resulting in everything from loss of a file to complete, catastrophic destruction. My computer system runs my video editing application and is responsible for my clients' television commercials and audio/video projects -- and my livelihood! So, when my system crashes, it's a life and death EMERGENCY!

I vaguely remember the event surrounding this day in 1970 (The movie Apollo 13 brought it to life for me a few years ago).

With the world anxiously watching, Apollo 13, a U.S. lunar spacecraft
that suffered a severe malfunction on its journey to the moon, safely
returns to Earth.

On April 11, the third manned lunar landing mission was launched from
Cape Canaveral, Florida, carrying astronauts James A. Lovell, John L.
Swigert, and Fred W. Haise. The mission was headed for a landing on
the Fra Mauro highlands of the moon. However, two days into the
mission, disaster struck 200,000 miles from Earth when oxygen tank No.2 blew up in the spacecraft. Mission commander Lovell reported to mission control on Earth: "Houston, we've had a problem here," and it was discovered that the normal supply of oxygen, electricity, light,
and water had been disrupted. The landing mission was aborted, and the
astronauts and controllers on Earth scrambled to come up with emergency procedures. The crippled spacecraft continued to the moon, circled it, and began a long, cold journey back to Earth.

The astronauts and mission control were faced with enormous logistical problems in stabilizing the spacecraft and its air supply, as well as providing enough energy to the damaged fuel cells to allow successful reentry into Earth's atmosphere. Navigation was another problem, and Apollo 13's course was repeatedly corrected with dramatic and untested maneuvers. On April 17, tragedy turned to triumph as the Apollo 13 astronauts touched down safely in the Pacific Ocean.

200,000 miles from earth facing a real life and death situation and Lovell reports,
“Houston, we have problem here.” A problem? 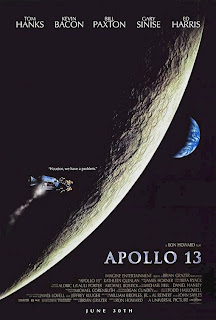 Today, you'll find the movie poster from Apollo 13 in my office. It's a reminder that, when faced with a situation like a catastrophic computer crash or other problem, to remember, “...we've got a problem.” It's not life or death, it's just an inconvenience. It's also there to remind me that “problems” have workout solutions. If those three brave men and a team at mission control could overcome all the obstacles they faced, I can get through just about anything you can throw at me.