President Barack Obama attended a Washington Wizards-Chicago Bulls NBA game last week where he chatted with a five-year-old Wizards fan in the seat next to his and exchanged high-fives with members of the crowd.

Obama even paid for his own beer and repeatedly chatted up a five-year-old Wizards fan, Nick Aiello, who probably wasn't expecting to have the Prez as his courtside seat buddy. (Reportedly Nick asked Obama for a bailout to help his lemonade stand which has seen a dramatic loss of business. Aiello is even considering laying off his little sister to help keep the stand afloat). 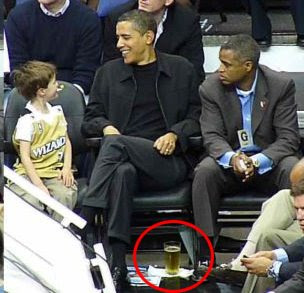 As far as the players go, Wizards forward Caron Butler seemed to be enjoying himself the most: he often exchanged eye contact and pointed fist bumps in Obama's direction. He also had the quote of the evening:

"I was truly nervous for the first time in my career just to have the president over there," Butler said. Then he paused a bit, before adding a well played wordplay: "And I'm glad we got the 'W.'"

Like most NBA teams, the Wizards are is some serious financial trouble. Can Omama help stimulating ticket sales for very poor basketball teams? Believers say, "Yes he can!"

Of course, there are two sides to every court – or story.

Obama's arrival delayed the start of the game by a few minutes and the president left the game early, but what got many people's attention was the sight of Obama drinking a beer.

Some callers to sports radio station WWL after the game had a problem with Obama enjoying a beer.

"People are losing 5, 10, 20 thousand dollars a day in the stock market, and he's sitting there drinking a beer!" one called said. "It's insulting... there's a lot of people suffering."

"The president is the president 24 hours a day. I don't think he should drink on the job," said another.

(I tried to reach Rush for a comment be he hasn’t returned my calls).

What do you think? Problems with the president taking a night off, taking in a game, and enjoying a beer?


Sir Bowie “Sure, I’ll have a beer with the Prez anytime” of Greenbriar
Posted by dkWells