I live in a town that is famous for our brain sandwiches. Yes, read brain (pork or beef) sandwiches. I've been know to devour one along with a couple of fishbowls of ice cold beer (preferably PBR when I can get it).

I bring this up only because Lady Suzanne and I are getting ready to head to our "downtown" to walk around the city's "First Friday's" event. I know that there will be a vintage car show, beer, and... cross food (which I LOVE!)

According to Gourmet Food Magazine, Gross Food is becoming a movement. I think that this is something that all good Knights should celebrate. From a recent article by Roberts Ashley (edited for length. Photograph by Winnie Yang): 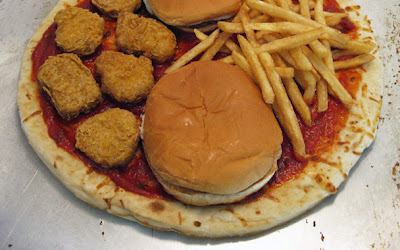 In the faddish world of online pop culture, a particular species of food movement has taken root. Its partisans don’t care whether your ingredients are fresh, organic, or locally grown. Really, they’d prefer it if you did your grocery shopping in the freezer section. The movement isn’t about taking your time in the kitchen or cooking from scratch, though its adherents sometimes spend hours on their creations. And if you’re focused on making healthy, balanced meals, free of trans fat, light on meat, and served in modest portions, then you’re definitely not among their ranks.

The Gross-Food Movement, as I hereby christen it, is a grassroots embrace of all things deep-fried, bacon-wrapped, and cheese-slathered. The movement recently made its way into the media spotlight with meteoric rise of the blog This is Why You’re Fat (which was promptly followed by book deal), but Gross Food has its roots in dorm-room kitchens and Super Bowl parties. Fueled by photo-sharing sites including SupersizedMeals.com and popularized by an online audience hungry for the ridiculous, the movement seeks to create food concoctions that violate all the rules of healthy eating and gustatory sophistication. Gross foodies compete in a battle to create the most outlandish, gluttonous, artery-destroying food combinations possible: Deep-fried peanut butter. Meatloaf stuffed with macaroni and cheese and wrapped in bacon. Sloppy Joes on Krispy Kreme doughnut buns. And that’s just the simple stuff.

Consider the Taco Town Taco. Inspired by a Saturday Night Live skit of the same name, gross foodie Andrew Sloan and his friends spent hours in an Oklahoma kitchen building this fast-food Frankenstein. Layered among the tortillas and beans were a crèpe stuffed with sausage and eggs, a “meat lovers’” freezer pizza, and a blueberry pancake. Sloan and friends put it together, dipped it into a vat of batter, and deep-fried it. Then they dropped it into a bucket of vegetarian chili. Then they ate it. A few bites at least.

Something about these creations just grabs your attention—layer upon layer of gluttony in an age when we’re inundated with messages about improving our diets, eating less-processed food, and watching our weight. It’s a middle finger to the Michael Pollan and Alice Waters types, an assertion of the American birthright to consume in deadly quantities.

The “gross” in Gross Food, after all, also implies an excessive size. Case in point: The “Porkgasm,” several pounds of various kinds of pork—two types of homemade sausage, bacon, and ham, stuffed with smoked sausage, pork belly, and even more bacon—all sculpted into the shape of a pig. All pigs are made out of meat, of course, but this one is something special. The Porkgasm’s creator, Zach Spier of Portland, OR, balks at the Gross Food label (“My food’s not gross!”), but he revels in the competition to create an edible spectacle. “People are making all of this stuff for the same reason someone might try to make a flashier piece of art than someone else,” says Spier. In this case, he saw a picture online of a smaller, less ambitious meat pig and thought he could make a flashier, fleshier version. “I figured, I know how to cook, and I could do a bit better and make something funnier and more revolting and more unhealthy.” So did it actually taste good? “It’s pork,” says Spier. “Of course it was good. Even my mom had seconds.”

The beauty of Gross Food is that we’re free to gawk at the works of adventurous gluttons, but we don’t have to eat them. Like competitive eating they provide a vicarious thrill, the taste of sin without the mortal danger. For that, those of us on the dietary straight and narrow give thanks (end).

So, tonight's assignment is to enjoy your favorite Ale and...

I'll expect a report on my desk in the morning.