Thars Gold in them there Hills!!

I sometimes see a news item and think i'm missing a few tricks in life. I mean, i'm a metal detectorist, i know that most fields in the UK have dozens of items dropped in them over the centuries, and then I saw this item below in the press and it got me thinking.

American metal detector enthusiasts pay more than £2,200 each to search field in Norfolk
For most tourists, no trip to Britain would be complete without a visit to Buckingham Palace or Stonehenge.

But for this group of Americans, a small muddy field in the heart of Norfolk was reason enough for their trip.

They are among 21 metal detector enthusiasts who have paid more than £2,000 each and flown thousands of miles to discover the treasures scattered across East Anglia. 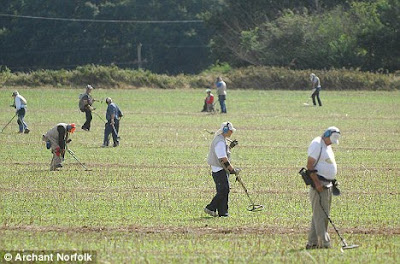 Looking for treasure: The American metal detector enthusiasts fly thousands of miles to Norfolk every year

Heads down and brows furrowed, the group spent most of their eight-day holiday patiently waiting for the small 'beep' that would tell them their efforts had been rewarded.

Most appeared so deep in concentration that they were unaware of the glorious rolling countryside around them - and the rare sunny weather.

Each was armed with their very own detector, which projects an electro-magnetic field into the ground and beeps when it comes into contact with anything metallic. 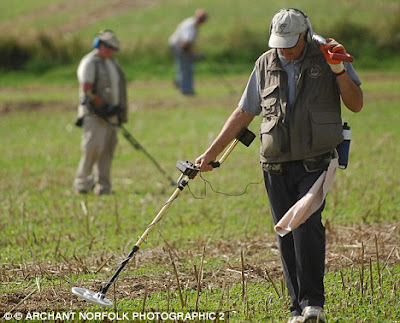 Precise: The highly sensitive detectors are equipped with satellite positioning to pinpoint the location of finds

But although the Americans were determined to 'touch the hand of history' by finding an ancient artefact, most were left with just an old tin can or used shotgun cartridge to show for their labours.

One enthusiast, Jim Normandy, 79, a retired pharmacist from California, said he was 'thrilled' to unearth a 17th century button.

'We have been coming here for 19 years, first to Kent but mostly to Norfolk, because there is so much history here,' he added.

Treasure: One enthusiast found a 17th century button in the field

'There were 21 people in this year's tour, having slimmed down following the September 11 attacks. There used to be two groups of 50.'

He paid £2,200 for the trip, excluding flights, and stayed at the same Norfolk hotel the group have chosen for years. There, after hours of sweeping harvested canola fields, each find was meticulously logged.

The Americans most spectacular discovery to date has been a 2in Thor's hammer Viking pendant, made from silver and gold, which was found in the Great Witchingham
area.

But they have also found objects dating back to the Iceni tribe, Bronze Age axe fragments, as well as Roman jewellery, Saxon brooches and medieval money.

Enthusiasts: The Americans come over to England on organised detecting trips looking for buried artefacts

Their most successful find this trip was a gold 'Angel' coin from the time of Henry VII.

David Barwell, a former chairman of the National Council for Metal Detecting, who selected the fields for US tour operator Discovery Tours, said: 'You will see our objects in displays at Norwich Castle Museum.

'The experts are keen to have the help of responsible detectorists to help them piece together Norfolk's history.

'Sometimes a Roman coin might be only worth a couple of quid, but is priceless in terms of history.'

Actually...i know how they feel...its rather wonderful....now if i can tie this all in with a beer hunt too... we might have ourselves
an idea..:)
Sir Dayvd ( who is full of good ideas....and that's it. ) of Oxfordshire