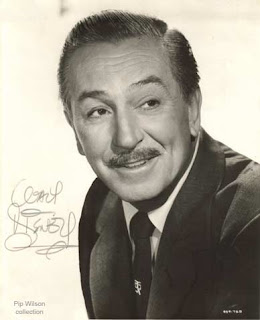 Born on a Missouri farm, Walt Disney sold his first sketches to neighbors when he was just seven. At age 16, during World War I, Disney went overseas with the Red Cross and drove an ambulance that he decorated with cartoon characters.

Back in Kansas City, Disney started working as an advertising cartoonist. He founded a company called Laugh-O-Gram with his older brother, Roy, but the company went bankrupt and the brothers left Kansas City for Hollywood with $40 and some art supplies. The brothers built a camera stand in their uncle's garage and started their company in the back of a Hollywood real estate office.

The rest, as they say, is history.

In addition to his films, his legend lives on through Disneyland, Walt Disney World, and EPCOT Center, and generations of children have experienced the joy and magic of The Happiest Place on Earth.

So, get out your journal or sketch book and dream. Tonight, toast ol' Walt and the joy and laughter that his “sketches” have given this world.