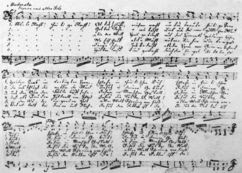 There is little argument that the most popular Christmas song of all time in the United States is Bing Crosby’s version of “White Christmas.” However, “Silent Night” (Stille Nacht) is arguably the most recognizable around the world.

There are a lot of myths associated with this song / poem.

One legend I read states that the organ in Father Josef Mohr's church was broken one Christmas Eve. So Father Josef whipped out his trusty journal and (together with his friend, Franz Gruber) wrote this new tune for the service that night and played it on his guitar for his congregation.

Like I said, there are a lot of myths surrounding this most famous hymn. But, there is hope for seekers of Truth: The Silent Night Association.

According to their web site, the association “is a non-profit organization based in Austria and open to all interested people around the world. The purpose of the Society is to further the research into all aspects of the history surrounding the Christmas carol "Silent Night! Holy Night!", as well as to promote the awareness and use of authentic versions of the song.“

SOME OF THEIR FACTS:

1816
Joseph Mohr creates the text to "Silent Night!" in the form of a poem in Mariapfarr in the Lungau region where he was living at the time.

1818
In the schoolhouse of Arnsdorf, on Christmas Eve, Franz Xaver Gruber composes a melody to fit the text.

1818
"Silent Night! Holy Night!" has its world premiere on Christmas Eve in the St. Nicholas church of Oberndorf near Salzburg, performed by Franz Xaver Gruber and Joseph Mohr.

Another source also states that in 1914
The song was sung simultaneously in English and German by troops during the Christmas truce of 1914, as it was one of the few carols that soldiers on both sides of the front line knew

You can learn more and check out the original lyrics at http://www.stillenacht.at/en/index.asp