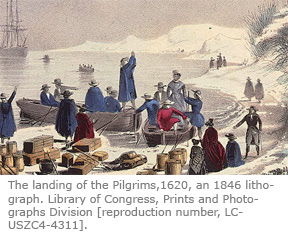 The following story has it all for Knights of Moleskine, Spirit, and Ale: Journal, Spirit, and...

On December 18, 1620, passengers on the British ship Mayflower come ashore at modern-day , to begin their new settlement, Plymouth Colony.

The famous Mayflower story began in 1606, when a group of reform-minded Puritans in , founded their own church, separate from the state-sanctioned Church of England. Accused of treason, they were forced to leave the country. After 12 years of struggling to adapt and make a decent living, the group sought financial backing from some merchants to set up a colony in . But, how did they settle on Plymouth Bay?

A shortage of beer!

An entry in the diary of a Mayflower passenger explains the unplanned landing at Plymouth Rock: "We could not now take time for further search...our victuals being much spent, especially our beer..."

Thank goodness! That may have been the last time 's settlers ran short of beer. They soon learned from their Indian neighbors how to make beer from maize. Local breweries sprouted up throughout the colonies, and by 1770 the American brewing industry was so well established that George Washington, Patrick Henry, and other patriots argued for a boycott of English beer imports (I think that if these fellows were around today that they would recant that thinking).

So, today we toast the so-called Pilgrims. After all, you can’t Think, Drink, and Be Merry if you run out of beer!