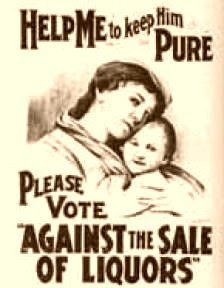 I saw a documentary once where a farm community went on a snake killing-spree thinking that they were doing a good thing. Funny thing about trying to do the "right" thing: sometimes it bites you in the butt. In this case, small farms were literally overrun with RATS!

It was sort of like that in the United States just a few short decades ago.

From The History Channel Web Site (edited for length):
On this date in 1919 : Prohibition takes effect
The 18th Amendment to the U.S. Constitution, prohibiting the "manufacture, sale, or transportation of intoxicating liquors for beverage purposes," is ratified on this day in 1919 and becomes the law of the land. The movement for the prohibition of alcohol began in the early 19th century, when Americans concerned about the adverse effects of drinking began forming temperance societies. By the late 19th century, these groups had become a powerful political force, campaigning on the state level and calling for total national abstinence. Prohibition took effect in January 1919. Nine months later, Congress passed the Volstead Act, or National Prohibition Act. The Volstead Act provided for the enforcement of prohibition, including the creation of a special unit of the Treasury Department. Despite a vigorous effort by law-enforcement agencies, the Volstead Act failed to prevent the large-scale distribution of alcoholic beverages, and organized crime flourished in America. In 1933, the 21st Amendment to the Constitution was passed and ratified, repealing prohibition.

Yes, it truly was time that made men want to cry in their beers and denied them the beer to cry in.

But resourceful people found creative and profitable ways to continue to brew beer.
And one source I read, in order to stay in business, Anheuser-Busch produced Budweiser Yeast. They sold a 5 pound cake of brewers yeast, hops, and other ingredients and items necessary to brew beer. They knew America was drinking as much beer as they were before prohibition and figured whoever was going to make it still needed ingredients and supplies. They wanted to keep their vendors and supply lines open and ready to go when the Great Experiment failed.

In 1933, the 21st Amendment to the Constitution was passed
and ratified, repealing prohibition.

Here's to snakes and the failure of the Great Experiment!