Jesus, Buddha, Thomas and the Knights

No, this is not the title of a new Elton John song! It's a song as old as time itself, which is without end, so it's a new song. We must keep singing this new song before we regress to object thumping Neanderthals in some cave in France. All great Spiritual Leaders challenge us to embrace the Holy in every day life. Not to separate from it.

Our challenge today is to embrace what makes us unified instead of focusing on what makes us different. If you truly understand the meaning of being "awake", then being Unified
through Diversity brings a marvelous positive energy to your life and those around you. 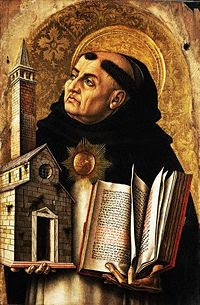 Today is the Feast Day of St. Thomas Aquinas, one of the great Doctor's of the Catholic Church, which at his time was simply called the Church. Catholic means universal, yet somehow we have done a great job of alienation with our Christian brother's while they have done a great job of demonizing us. Where is the Unity through Diversity? Many fundamentals will point to St. Thomas as the motivation behind the absolute authority of the Church; however, how many have actually read his works, or understood his influences and truly know what he believed? That's what I would like to share today.

"Aquinas viewed theology, or the sacred doctrine, as a science, the raw material data of which consists of written scripture and the tradition of the Church. These sources of data were produced by the self-revelation of God to individuals and groups of people throughout history. Faith and reason, while distinct but related, are the two primary tools for processing the data of theology. Aquinas believed both were necessary - or, rather, that the confluence of both was necessary - for one to obtain true knowledge of God. Aquinas blended Greek philosophy and Christian doctrine by suggesting that rational thinking and the study of nature, like revelation, were valid ways to understand God. According to Aquinas, God reveals himself through nature, so to study nature is to study God. The ultimate goals of theology, in Aquinas’ mind, are to use reason to grasp the truth about God and to experience salvation through that truth. Aquinas believed "that for the knowledge of any truth whatsoever man needs Divine help, that the intellect may be moved by God to its act." However, he believed that human beings have the natural capacity to know many things without special divine revelation, even though such revelation occurs from time to time, "especially in regard to [topics of] faith." Aquinas was also an Aristotelian and an empiricist. He substantially influenced these two streams of Western thought."

Wow! Faith and Reason? Aristotle? I thought he was a stupid Greek bastard-heretic! (Just kidding) He also embraced Metaphysics and Logic, the Alchemist's of the day. The Irish writer, James Joyce, counts him among his great influences.

I read with joy in the paper yesterday about a Church in Harrisburg, PA, home of McGrath's, that is going to start a bar ministry were they will hang out, have a few drinks and be open to talk with strangers who need to talk, share ideas, communicate. Yes, they don't know it, but they have just become Knights of Moleskine, Spirit and Ale. When the Pastor was asked why he is doing this he responded, "We're only doing what Christ did. We have to go where the people are going." That my friends is a perfect blend of faith and reason!

Enjoy your day,
Sir Hook of Warrick
Posted by dkWells