It's a New Day Yesterday...But an Old Day Now 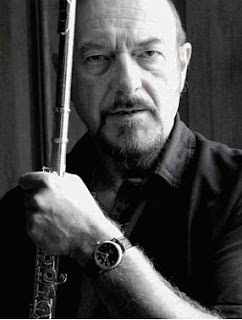 I finally arrived home after 29 hours of being awake, smelly, tired, sired and generally irational from my travels. This reminded me of Ian Anderson and the Jethro Tull song, "Its a New Day Yesterday...But an Old Day Now!" After 30+ years of listening to this favorite I finally got it today! This lead me to check out their website where I found this handsome photo of Ian, news of their 2008 World Tour and his 2008 New Year's Resolutions, which I'm sharing with you now:
2008 Resolutions
My New Year’s resolutions are many: mostly involving tidying up work spaces. The office, the studio, the warehouse where all the musical equipment is kept – all in need of the annual pre-Spring clean. Hopefully my stomach will shrink of its own accord, requiring only a few less vegetarian curries than last year to help it along. My hair has started to grow back at an alarming rate, or it seemed in a moment of wild optimism this morning. Oh, yes – did I mention my new spectacles….I must remember to be nice to children and grannies. I will try harder to be a good and tolerant person. Especially when made angry by the occasional drunken Philistines and boors in our audiences in certain countries. The NY Times says that in recent years, excavations in Israel established that the Philistines had fine pottery, handsome architecture and cosmopolitan tastes. If anything, they were more refined than the shepherds and farmers in the nearby hills, the Israelites, who slandered them in biblical chapter and verse and rendered their name a synonym for boorish, uncultured people. Archaeologists have now found that not only were Philistines cultured, they were also literate when they arrived, presumably from the region of the Aegean Sea, and settled the coast of ancient Palestine around 1200 B. C. Well – they are still drunken Philistines to me….I will try not to indulge in childish, sexist commentary whether from the stage or in private oratory. Lavatorial humour is definitely out, unless provoked. What provokes lavatorial humour? Well, dodgy lavatories for a start. The sooner our theatres and auditoria get round to refurbishing the backstage areas along with the front-of-house restorations they are so volubly proud of, the better I will feel; the better I will dumpy-do. I will congratulate my fellow musicians when they play well; commiserate when they know they haven’t. I will treat drum roadies with the respect they deserve. I guarantee never to use my Doctorate or MBE attached to my name lest housebreakers and chainsaw murderers decide that I must be successful and wealthy and harbouring the crown jewels. And a D. Lit or MBE never guaranteed a leg-over, did it? Well, DID it? Sir Paulie Mac isn’t doing well in that department, is he? Sir Mick is now doing penile (sic) servitude and Sir Elton is, like me, beyond caring. Not that we don’t think about it on Sundays and high holidays.OK – now it’s time to get back to the basic purpose of this message: Happy New Year to you all and sundry and may the Good Lord Bless you if He is not busy doing something more important. Not really believing in an interventionist god, I think we might carry out our own tiny and earthly blessings on those we love, admire, appreciate, merely tolerate or - even rank along with the Philistines. For ‘tis the season of love, forgiveness and renewal of the human spirit. And paying off the credit card bill, refinancing the mortgage, speaking in strange, high-pitched voices to grand-children and smothering the cats with sentimental affection and lobster.

I also hereby add, as a Founding Father of the Knights of Moleskine, Spirit and Ale, Ian Anderson to our nobel role as our second honorary Knight. Welcome Sir Ian!