Where Good Beer Comes From 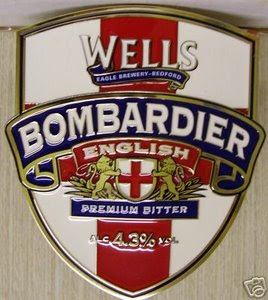 Thanks to some research from Sir Dayvd of Oxfordshire, we now know the story behind Wells Bomardier English Premium Bitter.

First: The History of the Charles Wells Family Brewery.

Charles Wells, after whom the company is named, was born in Bedford in 1842; he left school at the age of 14 and ran away to sea by boarding the frigate 'Devonshire' which was bound for India. In the late 1860s, Wells was promoted to Chief Officer when he fell in love with and proposed to a Josephine Grimbley. Unfortunately, his prospective father-in-law put paid to his plans when he announced that no daughter of his would marry a man who would be away at sea for months at a time. And so Wells, desperate to marry his sweetheart, left his sea-faring career and in 1876 established the Charles Wells Family Brewery to provide beer for the local population of Bedfordshire. In 1875, a two and a quarter acre site came to auction on the banks of the River Ouse as it ran through Bedford. This site contained both a coal depot and a brew house; included in the price were 35 pubs, mainly in Bedford and the surrounding area. Wells thought that beer would always be in demand, and with the help of his father he purchased the site and began work to turn the small brew house into a fully fledged brewery which could serve the county. As water is an essential ingredient for any beer, good quality water is needed in order to create the best beer. In 1902, Wells climbed a local hill a couple of miles from the brewery and sank his own well to tap into an underground reservoir of water, purified through layers of chalklimestone. All Charles Wells beer, and with the recent joint venture with Youngs all Youngs beers, are made with water drawn from this well. Exactly 100 years since the Brewery was established, the Brewery moved from its Horne Lane site to a brand new site on Havelock Street, the Eagle Brewery. The move came about due to an increased demand for the companies beers, spurred on by the Breweries deal with Red Stripe brewery Desnoes & Geddes. This offered the company the chance to install the most up-to-date brewing equipment, and a state of the art Bottling line. Today, the Company is still in the Family's hands, with the fifth generation coming into the business. There are currently three members of the family who work at the brewery, all serving on the boards of directors for both Charles Wells and Wells & Young's. The Company now has an estate of more than 250 pubs across the Eastern region, and has its beers sold by Well & Young's in bars across 23 countries through its John Bull enterprise.

Second: The History of William Thomas Wells, aka, the Fighter Billy "Bombardier" Wells

William Thomas Wells, also known as, Billy "Bombardier" Wells (August 31, 1889 – June 12, 1967) was a English heavyweight boxer. Fighting under the name 'Bombardier' Billy Wells, he was British and British Empire Champion from 1911 until 1919. In 1911 he became the first Heavyweight to win the Lonsdale Belt. He was also famous for being the second person to fill the role of the "gongman" - the figure seen striking the gong in the introduction to J. Arthur Rank films.

An award winning flagship English bitter which is described by Alastair Gilmour (British Guild of Beer Writers) as a "Superlative bitter with an unexpectedly light, fruity flavour and a mere suggestion of malt settles on the palate after a lap of honour over every curve of the tongue." Available in bottles at 5.2% ABV.