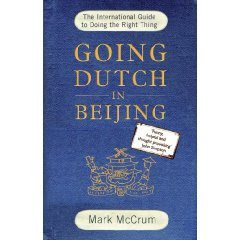 A fascinating Book you knights and ladies ought to pick up and browse when you do your next weekly healthy hour in your local bookstore... is Going Dutch in Beijing.

This isn't about Holland in the Olympic games or even going on holiday to China with a someone from the Netherlands...but an interesting guide world wide, as to what not to do in other countries, especially regarding things we do on a daily basis, here, that can get you a spell in a one bucket, jail cell if you don't watch out...like; why shouldn’t you offer to pay for your share of the meal in China? Or use the thumbs-up sign to mean “that’s excellent” in Sardinia?

Because, of course, despite the ease with which we can now communicate with and visit one another, they still do things differently over there. In China your host will “lose face” if you don’t let him pick up the tab. In Sardinia a raised thumb means, literally, “Sit on this!” Actually in Iran its even worse, so if you are ever in slow heavy traffic in Tehran, and you put up your thumb to kindly let someone pull over in front of you, you can expect to be on CNN "more details at 11" Coast to Coast news, in stripey jump suit and chains begging for the State Dept to contact your family, and sobbing like a baby. 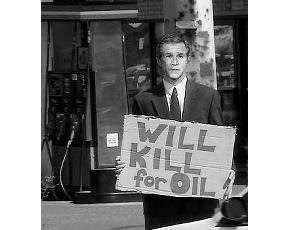 This is why it is Important that George "Dubya" Bush is removed quietly from the world scene. On a recent trip abroad he put up his hand with index finger and pinky finger raised... which of course in folksy Texas is the sign of the local Long Horns team...but in Spain and Italy they recoiled in horror and in Norway they are still talking of how he stood up on primetime and did the Sign of the Devil.

Actually George is far more guilty of other things than hand gestures, but someone should have at least made him read this book at the Inauguration.

Going Dutch in Beijing offers a lighthearted and informative guide to everything from first meeting to last rites. Subjects covered include the opening contact between strangers; greetings, gestures, handshakes, and getting names right; as well as more complex traditions and how to behave if you decide to stick around for good.

Don't show your palms of your hand to a Greek's face ( big insult ), if you show up late in Germany for dinner they will start without you...turn up early in Argentina and they will think you're greedy. You don't point fingers in East Africa..and while you are there you always serve food from a communal bowl with your right hand...( as they use their left for other functions ).

The OK sign in the States can mean the part of a womans body most other places...and talking about the States...we Brits really have to learn how to Tip when we show up there... as people will run out of the restaurant after you to demand it if you don't.

And so once again I put up two fingers to my American friends and say "peace"...or should they go the other way round.?

Sir Dayvd ( Thumbs up and swivel ) of Oxfordshire