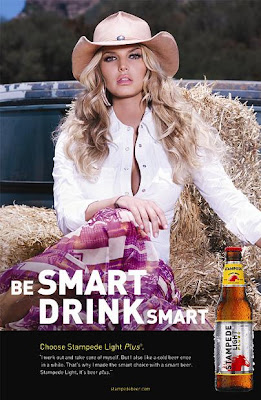 Sometimes a picture is worth a thousands gulps (oops, I mean "words").

Seems that Jessica Simpson's the new face (and other body parts) of Stampede Light Plus beer from Dallas-based Stampede Brewing Company.

Not only is Simpson, 28, serving as the beer's spokeswoman, but she also owns a 15 percent share in the brewer.

"Jessica found out about Stampede after trying it in Dallas and [liked] it so much that she met with the founder and became an owner," her rep told the Daily News (not John Stewart) on Wednesday.

Simpson liked the beer because it was "consistent with her healthy lifestyle and values," her publicist said.

So, if you want to "Be Smart" like Jessica Simpson, evidently you have to "Drink Smart."

Good Luck with That.