That Time of the Year

Yes, it's that time of year again here in the States – College Football.

Since the University I attended didn't even have a football team, watching college football is really just for fun and games. As I write this, my favorite team from the time I was a little kid appears to be well on the way to another “First Game of the Season” embarrassing loss for the second straight year. Ouch.

But, now to another great college tradition: Tailgating. Here's a brief history; however, as you'll read, no one really agrees on the origins:

The Origin of Tailgating v1.0
Tailgating dates back to the very first college football game between Rutgers and Princeton in 1869, when fans traveled to the game by carriage, grilling sausages and burgers at the "tail end" of the horse. Today tailgating is a part of most athletic events, especially college football.

The Origin of Tailgating v2.0

It all began at Yale in 1904. At least that's what they'll tell you. Is it true? Well, other schools claim the honor, but the Yale story has been verified by, you guessed it ...Yale. Seems there was a train made up of private railcars that brought fans to a Yale game. The train stopped at the station and the fans had to walk the distance to

the stadium. When they arrived at the stadium, they were hungry and thirsty. So the idea was born to bring along a picnic hamper of food for the next game. And so Tailgating was born. Necessity the mother of invention, right? Well, so they say.

The Origin of Tailgating v.3.0

Actually, tailgating started in Green Bay, Wisconsin in 1919, when the Packers were first formed. The farmers would back their pickup trucks around the edge of an open field, drop their tailgates to sit on and eat a prepared basket of food while they watched the team play. That's where the term TAILGATE came from.

SO, what's the number one favorite item to have at a tailgate party this year? 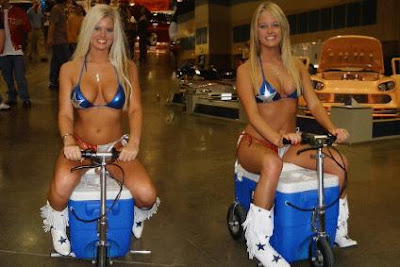 Have fun at your tailgate part!