A Pint and A Fight 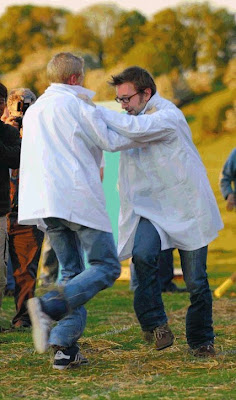 A Pint and A Fight is a Good British Night, was a headline I saw the other day that seemed to be the world view of what we get up to here, and while it is a bit on the exaggerated side, there is no denying that since as long as I have been able to think straight...I see all around me in my rural counties within a 100 miles of me...a great need to not only stand at a bar...but to stand at the bar of an ancient village pub...and sport lumps, bumps...swellings... contusions...cuts...broken arms and legs, gained through the course of an afternoons Macho sport...from the Conventional Rugby to the down right suicidal Cheese rolling to the mid ground of Shin Kicking.

Shin Kicking has been a standard form that we learned in our first School in the playground to sort out any disputes...but has largely gone unnoticed as an organised sporting activity. The sport has been practised on Dover's Hill, near Chipping Campden, since the early 17th Century.
Although not as aggressive as earlier versions, where players were said to have hardened their shins using hammers in over-zealous preparation for the main event, the competition remains the highlight of the Cotswold "Olimpick" games. Players, wearing the traditional white smocks of shepherds, grasp each other by the shoulders and attempt to land well-timed blows to their opponent's shins. Only then - in mid-kick - can a player attempt to bring his opposite number to the ground. A stickler, the ancient name for a judge or umpire, is on hand to make sure a shin is hit before a fall can be scored. Competitors must kick their way through early qualifying rounds, and swing their legs in a three-stage final to be crowned the shin kicking champion.

"It's part of the original games," said organiser Robert Wilson, referring to the rural competition established by Robert Dover in 1612. "It was vicious in those days, there was a lot of inter-village rivalry and lads used to harden their shins with hammers and were allowed to wear iron-capped boots. We won't permit that. People stuff their trousers with straw and must wear shoes. We never have broken bones but there are some bad cuts and bruises."

In 2004, more than 2,500 people turned up to watch the Olimpicks, which feature other rural challenges such as tug-of-war, sledgehammer throwing and Spurning the Barre, a Cotswold version of tossing the caber. It's a far cry from the 30,000 who are said to have gathered on the hill in the 1830s.

The growing popularity of the games, and associated rowdiness and thuggery - no doubt practised wholeheartedly in the shin kicking ring - eventually led to the games being outlawed in the 1850s. Resurrected in the 1950s, the games, and the shin kicking main attraction, have attracted growing support. Last year, 20 people turned up to compete for the crown. It was won by local publican Joe McDonagh, 41. "It's a bit crazy," he said, as he prepared to defend his title with a cheese sandwich and can of cider. "You need a few beers inside you to do it - you need a bit of anaesthetic."

So there you go Knights and Ladies....but I can tell you want to actually see this sport in action so buckle up and take a peek at the link below...and tell me what you think now. Personally I think it would be a great way for DubYa and Putin to sort out any squabbles over Oil rather than get the rest of us involved...fighting for them...but hey what do I know about Reale Politick.

As for me these days I prefer just to roll around in the hay and straw like I am below...and just have it stuffed down my T'shirt and trousers... Much more Civilised. 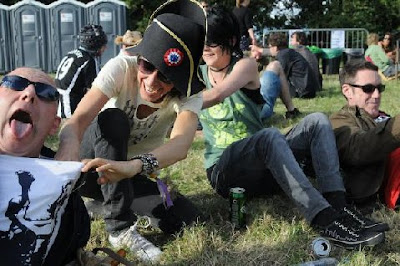 Sir Dayvd (Want a Fight?) of Oxfordshire
Posted by dkWells