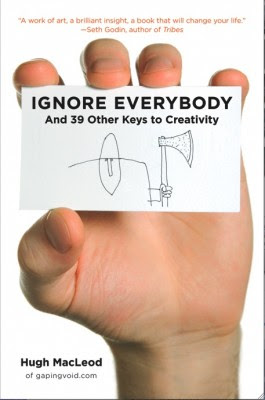 When I first lived in Manhat­tan in Decem­ber, 1997 I got into the habit of dood­ling on the back of busi­ness cards, just to give me something to do while sit­ting at the bar. The for­mat stuck. All I had when I first got to Manhat­tan were 2 suit­ca­ses, a cou­ple of card­board boxes full of stuff, a reser­va­tion at the YMCA, and a 10-day free­lance copyw­ri­ting gig at a Mid­town adver­ti­sing agency.

My life for the next cou­ple of weeks was going to work, wal­king around the city, and stag­ge­ring back to the YMCA once the bars clo­sed. Lots of alcohol and cof­fee shops. Lot of weird peo­ple. Being hit five times a day by this strange desire to laugh, sing and cry simul­ta­neously. At times like these, there’s a lot to be said for an art form that fits easily inside your coat poc­ket.
The free­lance gig tur­ned into a per­ma­nent job. I sta­yed. The first month in New York for a new­co­mer has this cer­tain ama­zing magic about it that is indesc­ri­ba­ble. Incan­des­cent luci­dity. Howe­ver long you stay in New York, you pretty much spend the rest of your time there trying to recap­ture that fee­ling. Cha­sing Manhat­tan Dra­gon. I sup­pose the whole point of the cards ini­tially was to somehow get that buzz onto paper.
Although I haven’t lived in New York since 1999, it still lives in me. Far too much, some would say… The ori­gi­nals are drawn on either busi­ness cards or bris­tol board cut to the same size i.e. 3.5″ x 2″. I use mostly a 0.3mm rapi­do­graph pen. Occa­sio­nally I’ll use other things– pen­cil, water­co­lor, ball­point etc, but not often. 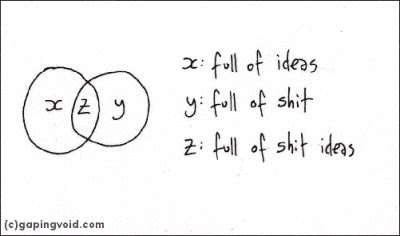 and get to know Hugh -- unless you want to take his advice and ignore him (as well as everybody).

At least sign up for his Newsletter: A Crazy­De­ran­ged­Fool [CDF for short] is, like me, some­body who has the teme­rity to aspire to work in a way that pro­du­ces both joy, mea­ning and con­tri­bu­tion for both them and others, while also paying the bills. It’s about crea­ti­vity, it’s about fin­ding mea­ning, but it’s also about living in the real world. That’s the rea­lity I want to live in, and from the vast quan­ti­ties of e-mails and com­ments I get from y’all, that seems to be your game plan, as well.