Sir Dayvd's post yesterday got me thinking (and then Google-ing).

That's where I discovered a guy with a true Knight spirit.
Meet Mathan Sawaya: The Brick Artist 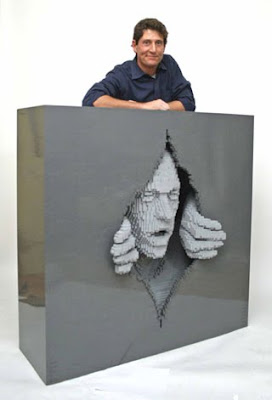 From his web site: http://www.brickartist.com/

Some artists use paint, others bronze – But for Nathan Sawaya he chooses to build his awe-inspiring art out of toy building blocks. LEGO® bricks to be exact.

With more than 1.5 million colored bricks in his New York studio, Sawaya’s sculptures take many forms.

Sawaya’s art is currently touring North American museums in a show titled, The Art of the Brick. It’s the only exhibition focusing exclusively on LEGO as an art medium. The creations, constructed from nearly one million pieces, were built from standard bricks beginning as early as 2002. More information on the tour, dates and locations can be found here.

A full-time freelance artist, Sawaya accepts commissions from individuals, corporations, and … well just about anyone with a good idea! He’s also available to design and build custom creations at events, photo shoots and conventions.

So let Sawaya know what you have in mind, there are literally no limits to what he can create out of LEGO. 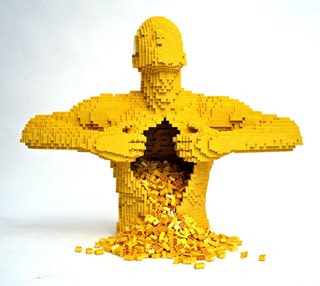 Sir Bowie of Toyland of Greenbriar
Posted by dkWells