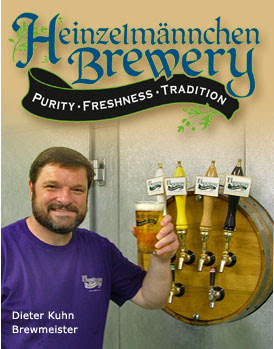 In a microbrewery in downtown Sylva, NC, German-born brewermaster Dieter Kuhn and his wife Sheryl Rudd are creating light and refreshing German beer made with wholesome grains, fresh hops & no preservatives. All beers are keg conditioned and non-filtered, making them smooth and lighter in body.
We specialize in altbeer — the style brewed in the warmer regions of Germany since the early days of brewing. ‘Alt,’ the German word for ‘old,’ is a synonym for the traditional, old way of brewing dark, top-fermented beer.

Heinzelmännchen are gnome-like creatures found in the Black Forest of Germany. They are rarely seen, however always helpful to creatures and people alike. 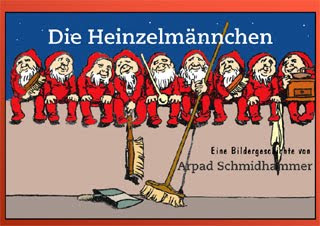 According to German folklore, the Heinzelmännchen visit proprietors during the night to assist with chores, so when the proprietor awakes he has more time to give back to his community. They have been celebrated in poem and song for their cheerful and helpful attitude.
At the Brewery, they keep a watchful eye on the beer at night and take care of any unfinished jobs so Dieter and Sheryl can concentrate on brewing the best beer, keeping their customers happy, and helping their neighbors.
http://www.yourgnometownbrewery.com
Sir Bowie "already trying to get the Kuhn name discount" of Greenbrair