Hafiz and the Sun in Drag

Hafiz was a great Sufi poet born in Persia (modern day Iran) in the early 1300's and is one of the world’s most beloved poets. He is affectionately known as the “Tongue of the Invisible” and the great Poet-Seer Ralph Waldo Emerson himself remarked that “Hafiz is a poet for poets.” 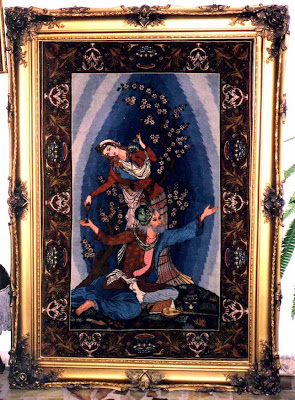 The poems of Hafiz have a beautiful and musical quality, which also embody a great spontaneity. In a myriad of poetic ways, Hafiz expresses the spiritual experiences of a mystic, in love with his Beloved. Yet he achieves this in a playful and enchanting way, like other Sufi poets, Hafiz weaves themes of ambiguity into his poems. Often he will use secular images such as wine, drunkenness and human love, however these are just symbols for the divine experiences which Hafiz is alluding to.
I often go to Hafiz for inspiration and today would like to share his translated into modern English poem, The Sun In Drag:
You are the Sun in drag.
You are God hiding from yourself.
Remove all the "mine"-that is the veil.
Why ever worry about
Anything?
Listen to what your friend Hafiz
Knows for certain:
The appearance of this world
Is a Magi's brilliant trick, though its affairs are
Nothing into nothing.
You are a divine elephant with amnesia
Trying to live in an ant
Hole.
Sweetheart, O sweetheart
You are God in
Drag!
I pray that our modern day Persians remember how to live as Hafiz lived. I pray that we all learn how to live and express as Hafiz did.

Sir Hook the Sufi Poet of Warrick
Posted by dkWells