Last night I started watching a very well produced series on History Channel, America, The Story of Us! 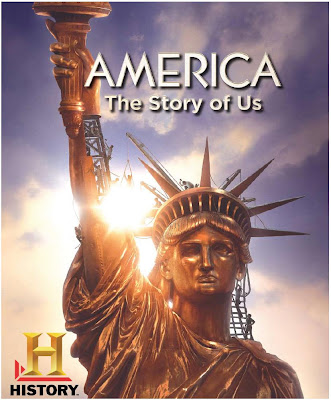 I was disappointed that there was no mention of beer in the the first 150 years. Tobacco, yes. Beer, NO!
So, I did a quick search on the history of Beer in the U.S. Here are a few notes on the early years:

1587
Virginia colonists brew ale using corn.
1607
First shipment of beer arrives in the Virginia colony from England.
1609
American "Help Wanted" advertisements appear in London seeking brewers for the Virginia Colony.
1612
Adrian Block & Hans Christiansen establish the first known brewery in the New World on the southern tip of New Amsterdam (Manhattan).
1614
The first non-native American is born in New Amsterdam, (perhaps the first non-native American male born in the New World) in Block & Christiansen's brewhouse. Jean Vigne grows up to become the first brewer born in the New World.
1620
Pilgrims arrive in Plymouth in the Colony of Massachusetts aboard the Mayflower. Beer is extremely short on board ship and the seamen force the passengers ashore to ensure that they will have sufficient beer for their return trip to England.
A more complete list can be found at

http://www.beerhistory.com/library/holdings/chronology.shtml
I know that some of my long lost Kuhn relatives were vintners; It's more than possible that a few were brewers.
Here is a news article I once ran across from St. Louis, 1883:

FAILURES IN BUSINESS; A ST. LOUIS BREWERY FIRM'S DIFFICULTIES.CALL FOR A MEETING OF THE CREDITORS OF THE ANTHONY & KUHN COMPANY--FAILURES ELSEWHERE.
September 20, 1883, Wednesday

ST. LOUIS, Sept. 19.--A rumor, which was soon substantiated, gained ground on 'Change this morning that the Anthony Kuhn Brewery Company, a concern recently incorporated by Henry Anthony and Francis Kuhn, of the firm of Anthony Kuhn, and Austin Voght, had succumbed to financial embarrassment. 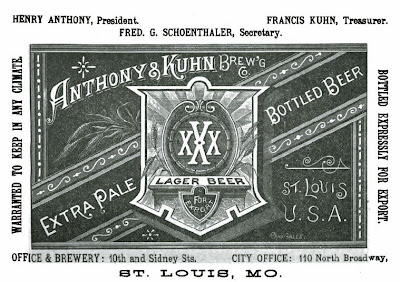 I guess it survived that battle, but I've read that in 1922 Anthony & Kuhn Brewery of St. Louis was sold to a laundry (clothes washed in beer?).

Just some odd ramblings for today.