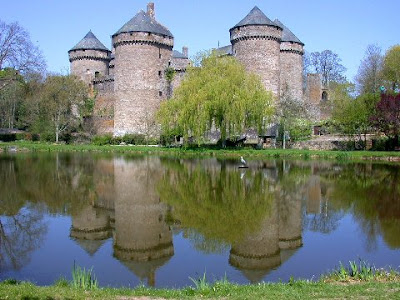 Its been a while coming...but I've grabbed an hour this Sunday to unload my poor camera of the weekly catalogue of historical trips it gets dragged on, and certainly one of the ongoing instalments bears grouping together and posting on what is a Knightly blog.
Its probably been mentioned before, but my involvement with the KMSA...arose when I bumped into Hook on one of my many scooches across the pond, and because he and Bowie were after an amourial for their idea of a Knights blog site...and that among the many projects I juggle daily is my in-depth study of 12th to 15th Century Illuminated manuscripts and replication of historical design...then, the heraldry crest for the KMSA was the result.
One of my pet projects of this era, is the little known life of Chretien de Troyes, a 12 Century french trouvere, a word troubadour, who in hindsight could be called the godfather of the eventual novel form, though this wasn't what he set out to do.
http://en.wikipedia.org/wiki/Chr%C3%A9tien_de_Troyes
Much of what De Troyes put down, was eventually incorporated into Sir Thomas Malory's " Morte D'Arthur" and the Knights of the Holy Grail, 300 years later, including Lancelot, Galahad, and Gwain the Green Knight, and indeed, uncomfortable as it may be to Brits ...much of the whole Gothic medieval culture, architecture and pageantry that is associated with our image, actually came North from the lowlands of France during that time.
Even though i've been lucky enough to have been able to study some of his manuscripts for real, most recently in the Morgan Library on Madison and 36th in New York......... 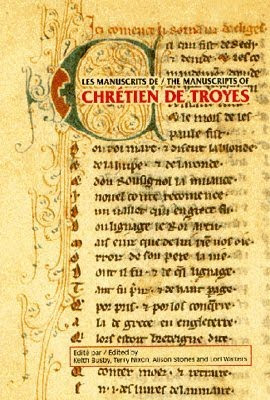 ..........I always look forward to continuing the regular field research trips to France that we embark on, as, much of the culture, attitudes and indeed buildings still survive in the Northern Cape. After another week there I can safely say its the land that time forgot, where you can at last bring alive much of what you study in the old documents.
I haven't got room for every photograph here...but setting off, on mountain bikes, from a first base in Ambrieres les Vallees in Mayenne, 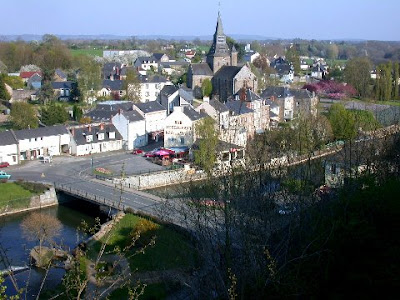 .................we headed north passed Lassey les Chateaux, a castle we have visited many times, (and appears in the picture with me in, at the foot of every months KMSA blog) and we stopped and took a shot of it, bathing in the hot sun by its lake (see pic at top of this blog).
Outside that village is the ruins of another notable Castle (chateaux des Bois Thibault....Castle of Thibault Woods.) 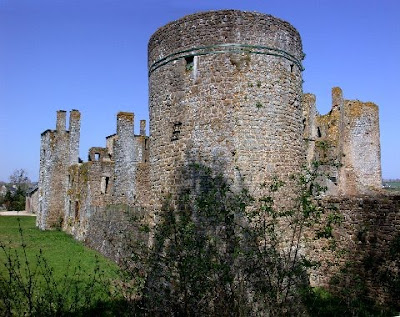 ...showing that castles that gradually got left outside a growing community withered over the long centuries, and got left silent to the crows and rabbits and became a source of stone.
Many tough miles north, is the medieval hillside town of Domfront, high on its limestone crags in Basse-Normand. This is deep rural France, on an ancient route between Paris and Brittany, where everyone speaks just French, even though they might know some English.
Despite its completly ruined castle, and a massive Byzantine Bascilica, which is undergoing restoration, Domfront is still a mass of ancient buildings that makes Oxford look like Manhatten. After such a hot ride in the sun, naturally a Knight's thoughts turn to beers...and the Bar au Normand, opposite the Basilica, gave us the first of many re-hydrating stops.... 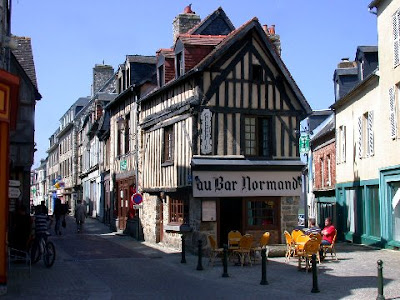 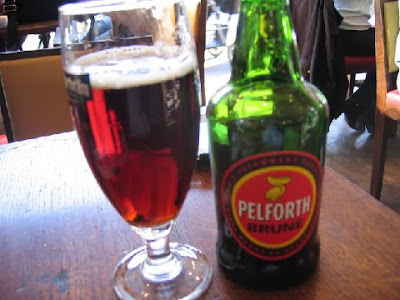 .............this one, being one of them there dark Lagers called Pelforth Brune, which had a heck of a kick, which we were to revisit later that evening.
After checking out the cool of the archive library, we made our way along the tiny streets, beneath the sound of bells of the new church, and found, in an original medieval house-shop, what was to me the find of the trip, that of an Artelier (craftsman) called Michael Vyse, who sat contentedly in his shop painting and carving from wood, in real time, the most fabulous illuminated paintings and relief carvings, that I have ever had the pleasure of seeing.
Even his door "Open" sign was a handpainted masterpiece. 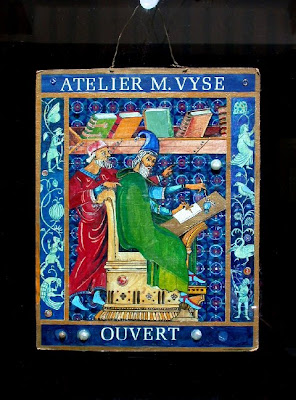 We talked to him for a couple of hours and he showed us his studios and all his works, and I picked out one mildly expensive piece he is going to finish for me over the next few months and I will pick up, on another visit. 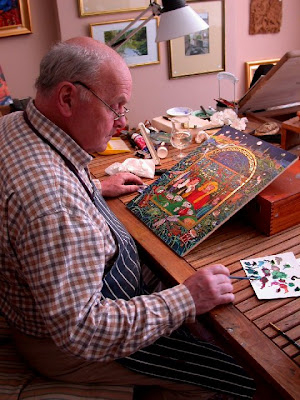 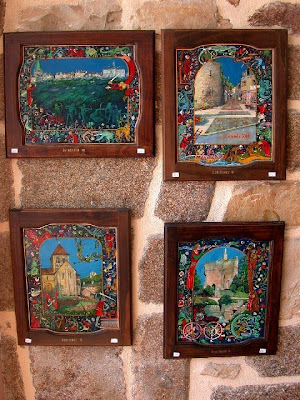 After a good nights rest under oak beamed ceilings, we headed West, with new fresh legs, to take in one revamped medievel castle and two beautiful churches in this heavily Catholic country, at Passais and at Pontmain.
The castle was even more lost in France than we were before, set as it was a couple of miles off even the nearest beaten track. 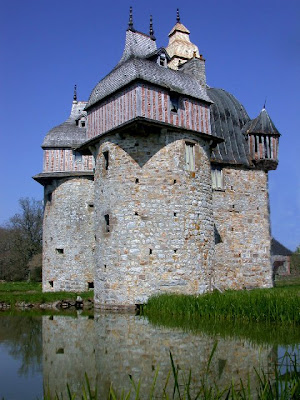 The standard broad turrets of Manoir de la Saucerie had had a 16th Century makeover to them, that even Baron Munchausen would be proud of, and while in typical French style it was completely deserted, all around was evidence that workmen were making new the roof tiles, so that the interior can be brought back to life, i'd say sometime in the next four hundred years.
The interiors of the catholic churches of this region are something to behold. At Passais au Mantilly, a frieze including many worshipful Knights runs round the whole apse as if queuing up to see the Virgin Mary high above the altar 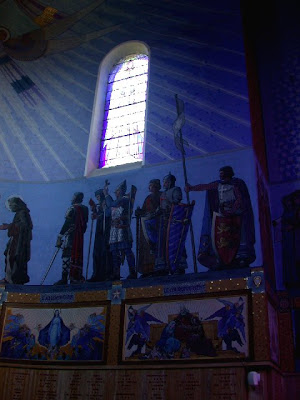 ..........and if the colors of that building weren't overwhelming enough, our next halt at the magnificent catherdral built in the small village of Pontmain, to commemorate the remarkbable Vision Of Mary, by four children during the Prussian war of 1871.............(a long involved tale that is worth reading)
http://en.wikipedia.org/wiki/Our_Lady_of_Pontmain
................ is like being immersed in an underwater kalidascope of fragmented blurred color, the like of which stays with you forever. 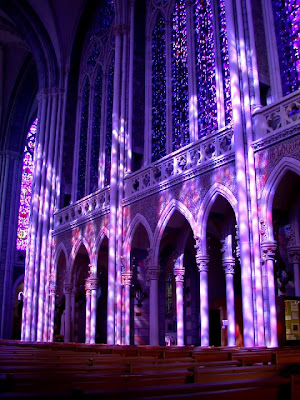 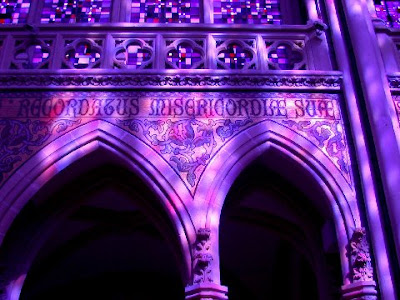 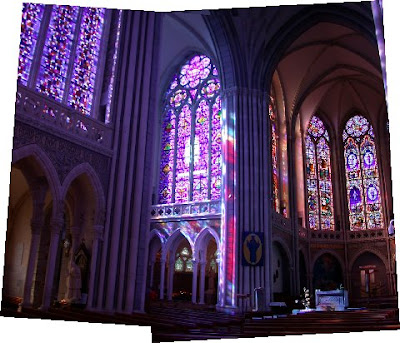 And so like the Knights in search of the Grail...the research and the travels continue, fortified by passion, beer, food and love, we sit on the stern of the cross channel ferry watching our wake, until our return. 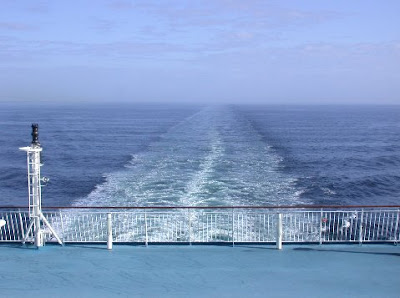