The Nashville Unity Through Diversity Tour 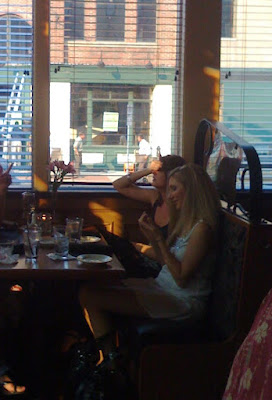 The Nashville Unity Through Diversity Tour began at the bar at Merchant's on the corner of 4th and Broadway. Across from the bar where a couple of young "hotties" talking about where to go shopping next while an Amish Gospel Group was setting up to sing across the street in front of an abandoned Irish Pub. Two totally different worlds separated by brick and glass getting ready to clash. At the bar I was joined in an interesting discussion with a late 60's couple and some young 20 something dudes about the Alison Krauss & Robert Plant concert that we where all going to attend in just under an hour. We were all there for different reasons. The older couple were big bluegrass fans, the younger dudes where Bonaroo Veterans who say the duo there and were raised on Led Zeppelin music by their parents, and this errant Knight who was reading himself for another night of adventure through the hallowed halls of Unity through Diversity! The other thing we discovered that we all had in common was the love for a Micro Brew out of Atlanta, Sweetwater 425 Ale! 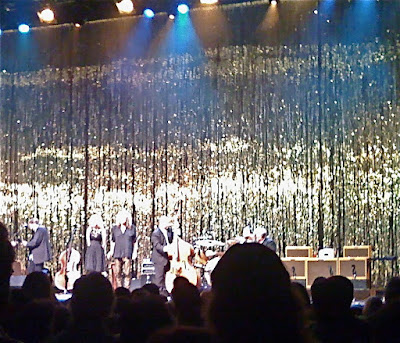 The concert was Awesome! Listening to Raising Sand, I knew that the vocals of Krauss & Plant complimented each other, but to hear them live was truly inspirational! What's worth seeing them live, and is missing from the CD, is their blues, bluegrass, folk, rock covers of Led Zeppelin and Plant covers. Totally amazing arrangements making the old new, the obvious not so obvious. Where Plant once ruled the stage with primal screams and falsetto's, now Krauss has taken that role while you hear Plant's voice at the bottom. It was transcending! This concert was a prime example of Unity through Diversity. Blending British invasion rock, American folk, bluegrass and blues with a hint of Gospel and world rhythms. It created a beautiful meritage of music! In an interview after the concert they asked Plant if he planned to buy a house in Nashville. His answer really struck home with me about the world in which I'm moving now. He said, "I'm at the age now where I feel as if I have a flag of a privateer vessel above my head. I like the idea of descending on environments and being besotted by conditions and places and groups of interesting people. What that means is, if you stay there, the reality rubs through, and in the end it's not quite as magical. I think at this stage of my life I want to keep landing." 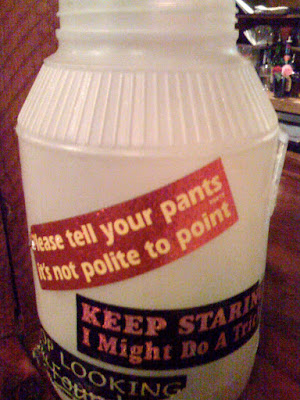 It didn't take long for reality to rub in after the concert! The Unity through Diversity Tour should have ended with the Spirit that was intended by Krauss, Plant and the gang; however, let loose on the streets of Nashville at midnight, it didn't take long for humanity to reveal it's true ugly nature. I made my way to one of the many music-bar spots along Broadway to catch more live music. I was greeted at the bar by this tip jar, where I was reminded that while I was watching young ladies dirty dancing on the floor that "I should tell my pants it's not polite to point!" I got the message, but unfortunately for a young man from Penn State, he didn't either read the message or understand it, or both. The result was a scene straight from a Western...the Saloon Fight! 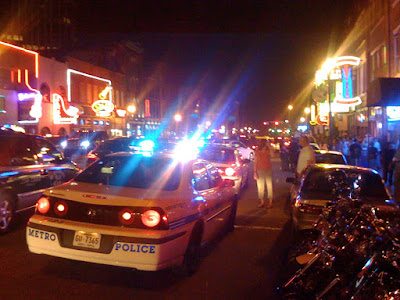 It didn't take long for the Police to arrive and restore order. It turned out that the Penn boy had insulted a wedding party from Chicago. He discovered something that I learned a long time ago, since my native State is Illinois...you don't take on a Chicago Mob alone! I was reminded of the evening that Lady Allwinky and myself experienced with another wedding party in Charleston just about a month ago. I decided that the night couldn't get any more interesting that it already had and retired my bones to the relative comfort of my Hilton King Size Bed a few blocks away. 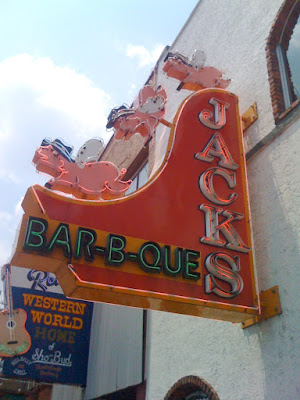 I woke up late the next morning and decided to have a late breakfast-early lunch at the World Famous Jack's Bar-B-Que on Broadway. Without a doubt the most delicious bar-b-que you will ever find. 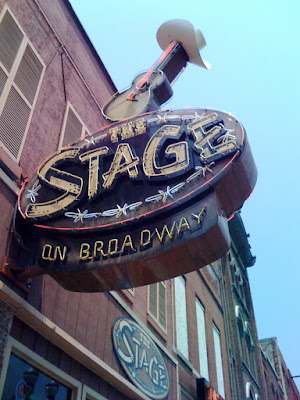 After lunch , I picked up where I had left off the night before. The Stage on Broadway. Nothing better than a morning after cold brew on a Sunday afternoon listening to young country artists trying to make their mark. 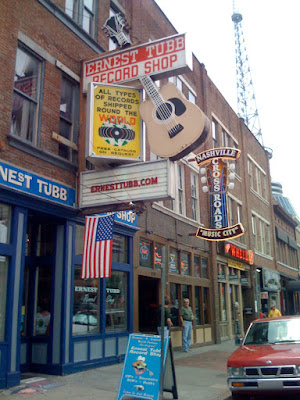 Finally, I stopped by one of my favorite haunts on Broadway, the Ernest Tubb Record Store. Nothing like escaping the 100 degree heat with hot music and rubbing your fingers in the history of music, as well as finding out a few hidden gems of the past, like Uncle Dave Macon and "Keep My Skillet Good and Greasy" After spending 2 hours and $120 I had the most interesting conversation with the "Dan the Record Man" behind the check out counter. We started talking about last night's concert and he shared that Robert Plant had come into the shop when he first came to Nashville to talk to Krauss about the project. He wanted to immerse himself in the old American music scene and asked Dan two things: 1) "I want something old and earthy." 2) "I want to hear a real American song writer that's living today." The two selections he left with were Bill Monroe and Townes Van Zandt. On Townes Van Zandt's CD is the song "Nothin' ", which he wrote a few years ago. That song made it on the Raising Sand CD with Krauss & Plant. So of course, I had to go get the CD as an add on sale. Money well spent!