In our modern age, and in all the best romance novels, I forever read of desperate housewives and lovelorn young girls wishing their "white knight in shining armour" would show up and whisk them away on a white horse. History has a habit of scotching these fairytale myths, with prosaic and for men, practical reality.

Put simply , Ladies, and I know you are out there, through the ages, make sure they hook up with the top Dogs... the head honchos...the guys that can look after them and themselves, and provide them with comfort, especially back then, when marriage was on a par to playing Monopoly, with dowries and land being more important than Love.

Plate Armour and textiles in the 14th to 16th Centuries, came in cheap off-the-shelf or expensive. So if you were a man of means , and admit it girls you always like a man of means, you would have bought the "Black"smiths, best produce, that would have been finished in black, and usually engraved around the "Bullet Points", as "proof" where they had fired crossbow bolts at it, to show it was impenetrable and the best armour. The cheap "silver" colour plain armour would have been bought by first time knights with no real money and land to their name.

The same goes for textiles. To afford the special dyes that enabled cloth to be dyed black and remain black over a long period , and not fade to grey, would have been very expensive...and so Black Knights back then would have the ladies swooning and to put it mildly, all in a lather, in a big Black cloak. Your "white" un-dyed knight would not have even got a look in, in all this frenzy.

I was reminded of all this at the weekend, when visiting a massive rock festival held in the vast estates of the Duke of Malborough at Blenheim Palace, at Woodstock, about a mile from my own pile. Before Blenheim Palace was built in 1705 as a gift from Queen Anne to the then Duke for victory over the French at Blenheim, it was the old Royal Hunting estate "Palace of Woodstock ". Scene of many Royal events during Medieval time.

The entrance to the Concert wasn't through the main gates of the present palace, 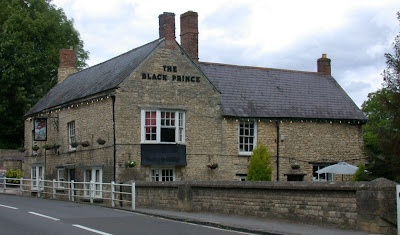 but at the north end of the vast estate, which meant leaving our bikes at the Black Prince pub (see picture ), in the upper part of the town of Woodstock ( yes it was the Woodstock Festival :) This Pub was named to commemorate the fact that Edward, The Black Prince, was born nearby.


Edward was born on 15 June 1330 at Woodstock, the eldest son of Edward III. He was created Prince of Wales in 1343. He showed military brilliance at an early age, playing a key role in the defeat of the French army at the Battle of Crecy when he was only 16. In 1355, he was appointed his father's lieutenant in Gascony and the following year led another significant victory against the French at Poitiers, taking the French king prisoner. 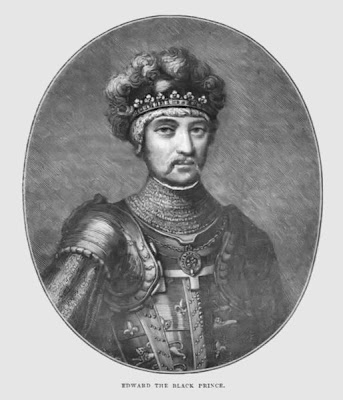 Although Edward never became king - he died before his father, Edward III - he was known in his lifetime as Edward of Woodstock; the title of Black Prince developed after his death and referred to the black armour that he wore, and not as, I over heard some ignoramus say to another tourist, because he was a black hearted rotter. Indeed, he was an all round good guy, with lots of Money!

Over the centuries...Black Knights have been portrayed, with jealousy by poorer writers,
as ruthless cold hearted monsters...(Hey, how else do you get your hands on a good supply of money:) instead of practical and financially astute, and brave and skilled in battle, which is how you did get your pay by beating foreign knights who paid to take you on. The "White Knight" became the underdog with Honest values...etc, which try as I might aren't paying my tax bills. The echo today is that its why you drive around in a black Cadillac or Rolls Royce if you are very high status.

So Ladies, form a Queue, I'll be wearing the Black Suit tonight.